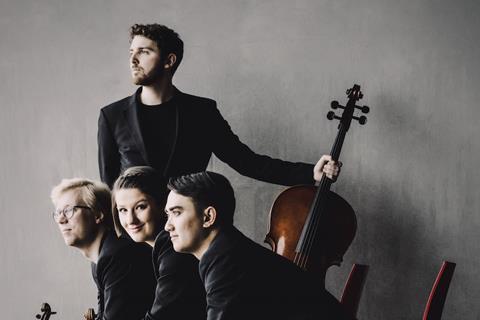 The Marmen and Simply Quartets have been announced as joint winners of the Bordeaux International String Quartet Competition.  They will receive €20,000, a three-year international tour and a professional photo session with Simon Buchou.

Founded in 2013 at the Royal College of Music, London, the Marmen Quartet (consisting of violinists Johannes Marmen and Ricky Gore, violist Bryony Gibson-Cornish and cellist Steffan Morris) are currently studying with Simon Rowland-Jones and John Myerscough at London’s Guildhall School of Music, where they are current holders of the Guildhall School of Music String Quartet Fellowship. Previous accolades include winning the 2018 Royal Over-Seas League Competition and Second Prize at the 8th International Joseph Joachim Chamber Music Competition, as well as the Special Prize for the best interpretation of a contemporary work (Four Quarters by Thomas Adès).

The Simply Quartet, consisting of violinists Danfeng Shen and Antonia Rankersberge, viola player Xiang Lyu and cellist Ivan Valentin Hollup Roald, was founded in Shanghai in 2008. Currently based in Vienna, where they are studying with Prof. Johannes Meissl (Artis Quartet) at the University of Music and Performing Arts, they are focusing on German and Austrian repertoire, with First Prize wins at the 2017 Haydn Competition in Vienna and the 2018 International “Schubert and Modern Music” Chamber Music Competition.

Taking place every three years, the Bordeaux International String Quartet Competition aims to create an atmosphere that’s less focused on competition than it is on music-making, and the artistic identity of the groups involved. Unlike other competitions, it contains no elimination rounds; instead, all the participating quartets play three recitals each with a free programme of pieces.