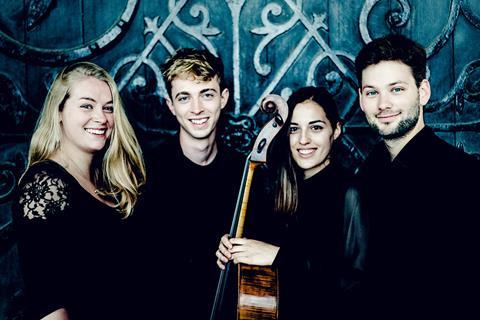 The London-based Barbican Quartet has been selected by the Kirckman Concert Society as Kirckman Artists for the 2020-21 season, bringing concert opportunities in London and elsewhere.

The other Kirckman Artists for the 2020-21 season are pianists George Xiaoyuan Fu and Andrei Iliushkin.

The quartet won first prizes at the 2019 Joseph Joachim International Chamber Music Competition, and the 2018 St Martin-in-the-Fields Chamber Music Competition. They made their Wigmore Hall debut in 2017 thanks to the Maisie Lewis Award, and were 2016 Park Lane Group artists. In 2018 the Royal Philharmonic Society awarded them the Albert and Eugenie Frost Prize and in January 2020 they were awarded third prize as well as the audience prize at the Heidelberg international String Quartet Competition.

As Kirckman Artists the quartet will receive concerts in London and other locations to be announced.

The Kirckman Concert Society was founded in 1963 to promote young artists of exceptional talent, and has been funded since its inception by the Chase Charity (now part of the LankellyChase Foundation).