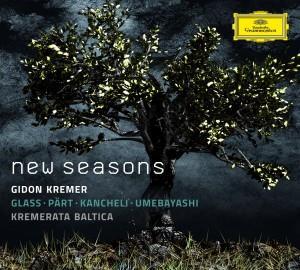 Gidon Kremer’s propensity for imbuing everything he plays with contemporary emotional resonances continues to provide a refreshing slant on the classics of yesteryear. Yet it is as a passionate exponent of new music that he really comes into his own. On this, his first album for the Yellow Label in over a decade, he focuses on music of an inherent expressive simplicity designed to explode the myth that modern music is intended more for the mind than for the soul. All four pieces rethink generic gestures in their very different ways, yet they manage to avoid the anachronistic irony of some forms of neoclassicism.Glass’s Violin Concerto encapsulates Kremer’s probing interpretative style as he micro-inflects the music with infinitely subtle changes of tonal shading (including his trademark flautando tendency), articulation and dynamic so that even the most potentially untroubled of phrases never truly relaxes.

Pärt’s Estonian Lullaby provides a gentle interlude before †¨the textural white light of Kancheli’s Ex contrario, a dazzling cornucopia of musical time-capsuling, which finds Kremer and his gifted band attaining nerve-jangling levels of musical intensity. Kremer’s refusal to take the easy, cantabile way out is at its most potent in Umebayashi’s Yumeji’s Theme, captured with exemplary clarity by DG’s engineers.