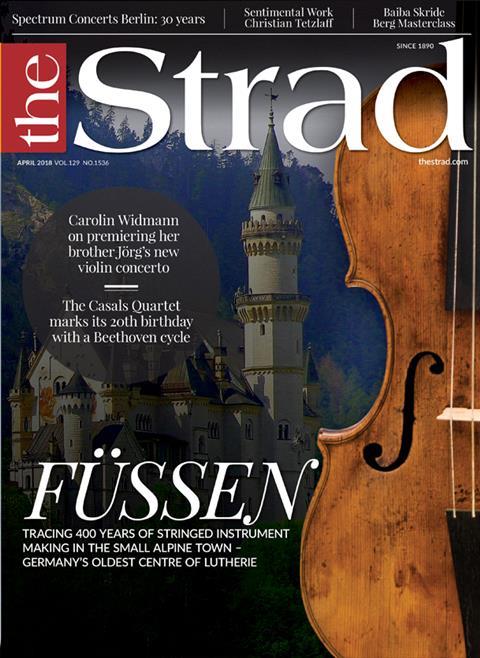 The Strad April 2018 issue is out now, in which a German focus begins with a look at the country's first lutherie capital of Füssen and how its influence extended as far as Venice and Cremona.

Violinist Carolin Widmann, known for her performances of contemporary works, discusses teaching, recordings, and why she is now branching into early music; and the Casals Quartet reflect on Beethoven's towering contribution to the repertoire – once dismissed by critics as ‘crazy music'.

In our Session Report, cellist Gabriel Schwabe explains how his latest recording project helped him to connect with the works of Schumann for the very first time; and we talk to Frank Dodge, founder of Spectrum Concerts Berlin, in their 30th anniversary season. Plus we examine the forgotten research legacy of the Vienna-born physician Franjo Kresnik, who became known in Cremonese circles as ‘the man who reads violins'.

In Focus features one of the few remaining violas made by Jacob Stainer, dated to 1660; Michael Köberling explains his method for cleaning brushes after varnishing in Trade Secrets; My Space features workshop of Leipzig-based luthier Jürgen Manthey; and in Making Matters we ask if the old Italians played their instruments in the white before varnishing.

In our monthly Masterclass, Baiba Skride gives her thoughts on the first movement of Berg's Violin Concerto; Minna Rose Chung on Tartini tones, produced when playing double-stops in Technique; Noah Bendix-Balgley, first concertmaster of the Berlin Philharmonic, tells us his Life Lessons; plus Christian Tetzlaff explains why he loves Beethoven's Seventh Violin Sonata in Sentimental Work.