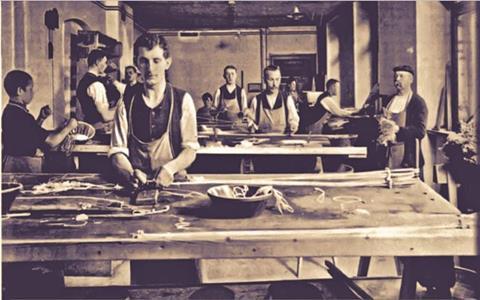 In 1877, the string makers’ guild of Markneukirchen in Germany celebrated its 100th birthday. As part of the festivities, the town’s postal clerk August Wilhelm Jäger was commissioned to write a song in praise of the town’s gut string makers. The son of a string maker himself, Jäger chose to write new lyrics to a popular song of the time, Ich bin der kleine Postillon, and filled 17 verses.

First, a skilful master must
Buy first-rate guts for little cost.
Whatever’s holey, black or burned
Should straightaway be spurned.

Put them in a potash vat
To make them softer than a cat.
If they’re too weak, or else too strong,
You’ve got the balance wrong,

The soaking will be finished when
You come in Monday morning; then
You’ll pull them up – but with finesse
So as not to make a mess.

Then you scrape the guts about.
You’ll slime them in and slime them out.
‘Slime and slime! But make sure you
Don’t rip a gut in two!’

Split the guts, but not in haste.
Already there’s a lot of waste!
Use great precision for each split,
To get the ‘bone’ to fit.

When every part aligns the other,
The Master checks them all together.
What ‘A’ will be, or fifth, or ‘D’,
It is for him to see.

Each string is hung upon a loop
Attached to a revolving hoop.
Screech! Screech! And if you’re not too fast
Then they’ll be unsurpassed.

Upon a wooden frame they’re spun
Before they’re taken off and hung.
The heat, the wind and sunshine fair
Will dry them in the air.

Sulphuric gas will bleach them raw.
Just twist them – that’s an easy chore.
Then rub them with a pumice stone
And lightly oil each one.

The strings should now be sparkling bright
And quite incomparably tight.
The master’s wife, content and wise,
Will cut them down to size.

It’s quick work, tying into rings
And knotting every batch of strings.
Of this, a Rossbach girl’s the queen
And beats any machine!

Line them all up, batch by batch,
And wrap them in a paper patch.
Off into the world they go
To make a lot of dough!

The world is desperate for strings
For double basses, violins,
Guitars and harps, and all because
They tend to break, or buzz.

Little David knew it all
Too well when he would play for Saul.
His harp sang at the king’s request.
As everybody guessed!

Now I must end my song (almost)
So let me now propose a toast!
To this, our flourishing and free
String making industry!