This Vuillaume is a mid-period ‘del Gesù’ copy, on which the f-holes of the ‘Ole Bull’ Guarneri have been imposed

Jean-Baptiste Vuillaume is the definitive figure in the violin making profession of the 19th century. A well-trained craftsman from Mirecourt, he was able to capitalise on Lupot’s success in Paris through his own industriousness and ambition. He is reckoned to have made more than 3,000 instruments in his career, all to astonishingly high standards of craftsmanship and finish, although he was able to employ many very fine luthiers within his shop. His work is invariably closely modelled on specific classical Italian instruments.

This violin is a pristine example of his work, made in his premises on the rue Croix-des-Petits according to its original label. It is a particularly appropriate instrument for Dextra Musica, since it is clearly modelled on the 1744 Guarneri ‘del Gesù’ owned and played by the great Norwegian violinist Ole Bull until 1857. Bull was influenced in his choice by Nicolò Paganini, who was the first great player to perform on a Guarneri violin and bring his work to the public notice. Bull also knew and worked with Vuillaume, and completed at least one violin of his own under Vuillaume’s guidance. However, this Vuillaume violin is in fact a generic mid-period ‘del Gesù’ copy, on which the very distinctive and elongated f-holes of the ‘Ole Bull’ Guarneri have been imposed. There is nothing else in the modelling or varnish that is derived from the authentic 1744 violin. It is absolutely typical of Vuillaume’s work in other ways, with his cleverly worked shaded and aged finish in which he was a pioneer. The handsome and flawless one-piece back is complemented by a front made from spruce with a prominent and beautiful hazel figure. 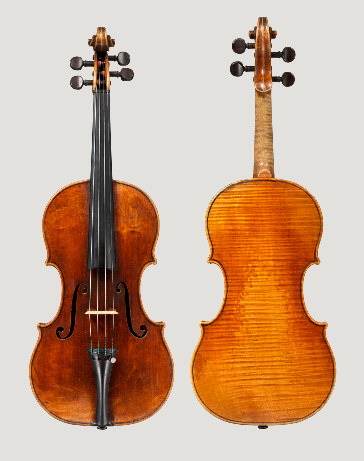