The workmanship of this bass is typical of Gasparo, with the distinctive double purfling and long, widely set f-holes

The oldest instrument in the Dextra collection is the magnificent Gasparo da Salò double bass made before the end of the 16th century. Known as the ‘father of the double bass’, Gasparo made instruments that often embody a fluid combination of several different styles of viol and violin. This bass clearly has elements of both in its design, a fact that has stimulated various interpretations of its origin. Gasparo himself was a player of the violone, or contrabass viol, and the history of this particular bass stretches astonishingly from Gasparo’s workshop through the 19th-century virtuoso Giovanni Bottesini to a 20th-century owner: Jack Fallon, the renowned jazz instrumentalist who played with Count Basie, Django Reinhardt and the Beatles.

The workmanship is typical of Gasparo, with the distinctive double purfling and long, widely set f-holes with their characteristic serpentine shape and equally sized upper and lower finial circles. The beautiful spruce top has been dendrochronologically dated to 1536. The head is not original, as is the case with most of Gasparo’s bass instruments, since different tunings and peg arrangements have been used over the centuries, and it is difficult to know whether this was made for three or six strings. 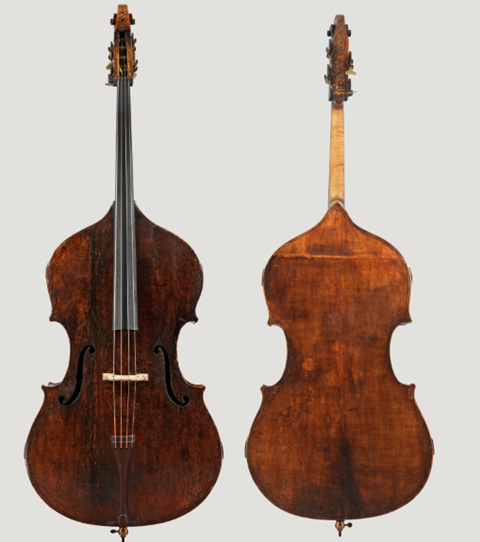