‘The first maker of what is unambiguously a double bass’

In this extract from the December 2021 issue, Thomas Martin, George Martin and Martin Lawrence examine the beginnings of bass making in Venice 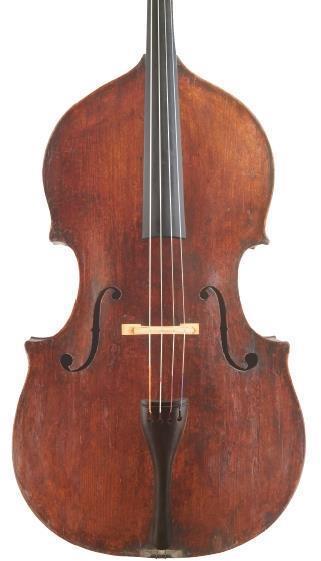 A c.1715 instrument by Matteo Gofriller, who can be regarded as the first maker of what is unambiguously a double bass

The following extract is from The Strad’s December 2021 issue  feature ‘The Venetian Double Bass: Venetian Splendour’. To read it in full, click here  to subscribe and login. The December 2021 digital magazine   and print edition   are on sale now

At the beginning of the 17th century, Venice was Europe’s second largest city, and had become fabulously wealthy in the previous centuries as Europe’s main gateway to trade with the Far East. It was home to affluent merchants who ploughed their riches into all manner of cultural activity, decorating their palaces with the finest furniture, textiles and paintings and laying on private concerts for their friends. As such it was a place where there was a great deal of musical activity, providing lucrative employment for musicians and luthiers alike. For the next 200 years violin making thrived in the city, developing its unique identity and style, but it was perhaps when the luthiers turned their hand to making double basses that they were at their most unconstrained. This freedom of style is best seen in the variety of ways that they designed the bass heads.

Among the earliest Venetian instrument makers were the Sellas family. Giorgio Sellas probably arrived in the city of Venice in the late years of the 16th century having travelled from his native Füssen, where the family were well established. Although they are not considered as violin makers as such but makers of lutes and guitars, they brought to Venice the necessary skillset of instrument making and the concepts of running a successful commercial workshop.

The first Venetian instrument maker known to have made instruments of the violin family is Martin Kaiser. He was also a native of Füssen, arriving in Venice to work in Sellas’s workshop around 1630. He went on to establish his own business by 1652.

In 1685 Matteo Gofriller arrived in Venice from Bressanone in the Tyrol region to work for Kaiser, eventually marrying his daughter, Maddalana and took over the Kaiser workshop upon his father-in-law’s death in the 1690s. Gofriller can be regarded as the first maker of what is unambiguously a double bass. While the dimensions of his basses are clearly modelled upon those of Gasparo da Salò, he employed a round back with a break set lower than the Brescian instruments (as opposed to Gasparo’s flat-backed instruments) and the pegbox is sized to accommodate three or four strings (rather than the six-stringed configuration that Gasparo’s instruments are assumed to have used). The bottom of the pegbox is formed in the ‘clog heel’ style of the earlier Brescians although with a vestigial tongue at the bottom of the central spine. The side view of the head with a very round volute, perched on the pegbox with a minimal throat, was copied by later Venetian double bass makers, although they often departed from his rather conservative working of the fluting around the front of the volute and back of the pegbox. The f-holes are a refined interpretation of the Stainer pattern that sweep gracefully outwards with a delicate lower wing. Again, this style of f-hole was adopted by many of the later Venetians for their double basses.