The components of violin varnish

In this extract from November 2007, Joe Robson explores the history and methods of making violin varnish 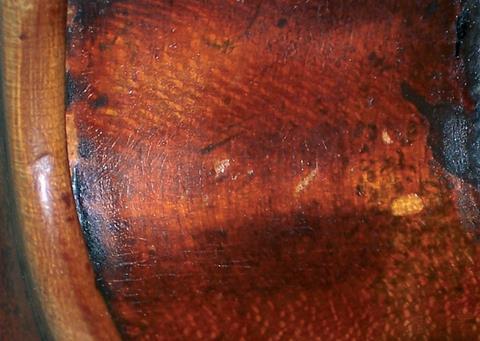 Classic coating: varnish from the rib of a Francesco Stradivari violin of c.1732

The following is an extract from the article ’Cremonese varnish: Shining example’ that appeared in the November 2007 issue. To read the full article, click here

There is a genuine, well-deserved mystery surrounding the making of a violin. The combination of materials, from the wood to the strings, fittings and varnish, as well as the interaction of the luthier with these materials, is – to say the least – complex. Likewise, there is a great deal of mystery surrounding violin varnish itself. Classic Cremonese varnish in particular has a warmth of colour, a liveliness of reflection, a clarity and a longevity which have made it the pinnacle of violin coatings. Yet whether or not we ever unlock the secrets of the great Cremonese violin varnish, there should be no mystery about varnish itself, its uses and its origins.

Varnish is simply tree sap and vegetable oil cooked together. Yet violin varnish displays true synergy in its materials. Its ingredients are brought together in a particular way that creates an entirely new substance, and one that is different from its ingredients in ways that could not be predicted by the ingredients’ own individual characteristics. The index of refraction of a well-made varnish, for example, which measures how fast light travels through it, will be higher than that of any of its constituent parts. Each ingredient brings some of its own distinctive traits to the mix but also loses others. Furthermore, when one component is changed, all of the other ingredients react in new ways. The ways in which raw materials interact in a finished varnish is determined by the varnish maker, and adjusted according to the qualities desired in the final varnish. Good varnish is not just a fortunate mistake: it is the result of experience and expertise.

As far as we know, the oldest varnish that still exists can be found on wooden mummy cases from Egyptian tombs that are more than 2,500 years old. This ancient varnish, made with five or six parts oil to one part resin, and without a cooked-in solvent, would have been warmed and then applied to the cases with a spatula. Because the tombs offered it protection from exposure, the varnish still looks good today.

The earliest complete description of the varnish making process can be found in the eleventh-century Schedula diversarum artium by Theophilus Presbyter, a monk from either Switzerland or Germany. This manuscript explains the combination of linseed oil and heated resin needed to make a durable and beautiful coating for wood, outlining much the same process that was followed before Presbyter’s writings. The process that varnish makers follow today has not fundamentally changed since then.

The first ingredient used in violin varnish is vegetable oil, usually walnut or linseed oil. Walnut oil is pressed from the raw nuts and then filtered to prepare it for varnish making. Linseed oil is pressed from the seeds of the brown flax plant, which is also the source of the fibre used in making linen. Flax is an ancient ingredient: it is known to have been used since 7,000BC – remnants of flax linen have been found in Stone Age Swiss lake villages, and it was used in ancient Egypt to weave material for boat sails and to wrap mummies. In making violin varnish linseed oil must be washed and filtered, then heated to remove any dissolved organic material. Once this process is complete, the oil is ready to be cooked for the final varnish.

Linseed oil has a special quality that makes it particularly useful as a raw ingredient in varnish. If a thin film of soy or olive oil is spread on a piece of glass and exposed to light and warm air, it does not seem to change much. After a few days, the surface simply remains greasy. If a thin film of linseed oil is spread on a glass plate, however, within a few days a remarkable transformation takes place. The residue changes from a greasy liquid into a tough, leathery solid called linoxyn. The drying of varnish thus depends on the linseed oil constituent turning from a liquid to a solid as it is exposed to air and warmth. Linseed oil also gives the varnish film flexibility, an important quality since it allows the varnish to move with the wood as it expands and contracts.