8 tips for perfecting your violin varnish

Advice from The Strad Archive on preparing, applying and drying varnish for best results 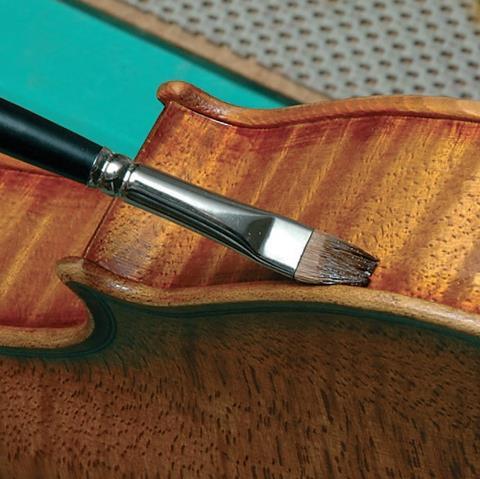 It is clear that the ancient violin makers and painters employed oil-based varnishes. There is no ‘ideal’ varnish, however. Stradivari often varied its features depending on momentary taste or delivery terms; and it cannot be said that his varnish is ‘better’ than that of a well-preserved Amati.

Nevertheless, the varnishes used by the old makers did have similar characteristics.

There are two general strategies for laying on violin varnish – a few relatively thick coats, or many thin ones. Spirit varnishes, which tend to dry quickly by evaporation, can’t be relied on to flow out, so are best applied in numerous thin layers.

This allows considerable control over the thickness, colour and evenness of the film, but the surface, if not rubbed completely smooth, tends to be a charmless cross-hatching of brush marks.

Texture may be regained over time as residual solvent is lost and the varnish shrinks to show the texture of the wood. Nicks, dents and craquelure may also add to the effect. Oil media, by contrast, dry much more slowly and can be pulled out in relatively thick layers.

How usable these varnishes are is highly dependent on their formulation: not just the ingredients and their proportions, but everything from how they are cooked to the temperature of the room in which they are applied.

An oil varnish soaks down thoroughly into the slender crevices and pores between the fibres of the wood. On the other hand a spirit varnish simply overlies it, and adheres like a skin which can be peeled off. The oil becomes practically an integral part of the wood; both welding together, as it were. Oil varnish possesses the merit of spreading evenly and uniformly if the temperature is warm. The film does not produce ruptures of inequalities. Spirit varnish, however, contracts at various parts under similar conditions; and in doing so leaves scattered crevices, which may connect together and produce a network of defects.

Varnish should flow from the brush but care must be taken that it does not set so quickly that it cannot be smoothed. Some varnishes take a while to dry between coats. Make sure you do not apply a further coat too soon and spoil your work. Some instruments have a ‘tacky’ feel about them even though varnished years ago: this is not good varnish. The finished film when dry should not be soft, chippy or prone to craze: the film must be firm yet yielding to the vibrations of the wood. These characteristics are to be found only in oil-based varnishes.

Before applying varnish, it is important to have a good foundation. Successful varnishing results from a well-prepared wood surface, with the highly coloured varnish applied close to the surface. A primer and sealer combination exposed to UV light provides good wood colour and preparation for a mineral ground coat that I apply to fill the pores, protect the wood and provide an even foundation for varnishing.

I use Koen Padding’s five-step system, which incorporates colour in the primer and mineral ground, not just in the varnish. Wood colour and surface texture dramatically affect the final outcome and should be treated with the same care as the varnish applications.

It seems to me most extraordinary that numerous writers who give instructions on the correct way to varnish a fiddle should recommend filling up the pores of the wood with a priming of a resinous nature, such as gamboge dissolved in spirit. Resin has no resiliency whatever, and is the very antithesis of flexibility. If you take a thin sheet of gelatine and bend it almost double it will fly back to its original form when you let it go. A sheet of resin would break, because it is inflexible, non-resilient, and friable.

We have formulated a new preparation method which produces a ground layer of pure silica with thicknesses similar to the ground layers found on old instruments. The preparation is based on mixtures of silicon ester and diatomaceous earth. Silicon esters are compounds of silica, carbon and hydrogren which, on contact with water, break down slowly into colloidal silica solution and alcohol.

The final product is waterproof, chemically neutral and free from reactions with its surroundings. When first applied, the fluid nature of the medium allows penetration into porous surfaces and in the gelatinous state it is highly adhesive.

The varnish that I generally use is formulated according to the analyses of classical Italian varnishes performed by Raymond White at the National Gallery, London. It’s essentially a solvent-free combination of linseed oil and Strasburg turpentine with little colour of its own, so I rely on ground pigments to create the tone I need.

Pigments such as madder, sienna and bone black have all been detected in Cremonese varnishes and – with the exception of the sienna, a suitably transparent example of which has eluded me – these are the ones that I use. Ready-made tube colours are popular with many makers, but are usually loaded with extenders, fillers and driers, to make them consistent with other colours in the manufacture’s range. Other makers prefer to make their own pigment, but I find this a laborious process.