Ask the Experts: is dendrochronology useful in valuing an instrument?

Dealers and auction houses increasingly include dendrochronology reports along with high-value instruments, but how meaningful are they in verifying an attribution? 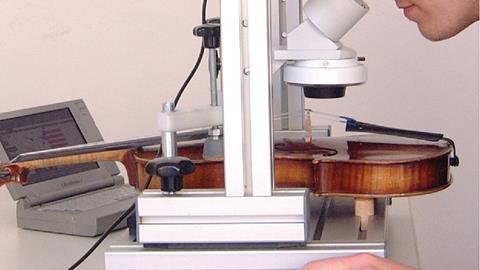 The dilemma I am currently in the process of buying a new violin with a fairly hefty price tag for my budget. According to the label (and the dealer) it’s by Giovanni Francesco Pressenda (1777–1854), but a couple of other dealers I’ve shown it to have demurred – one said it was definitely older, the other that it could be from the 20th century. I’m very tempted to have a dendrochronology report done, just to narrow down the field of guesswork – but I’m dubious as to how much use it’ll be. Would it be worth my while, given that the date of the wood isn’t necessarily the same as the date of construction?

Dendrochronology is a scientific method for dating the youngest tree ring on parts of musical instruments made from spruce (picea abies) or fir (abies alba). In pieces of wood with the bark still attached, the outermost ring before the bark indicates the last year before the tree was cut down. However, in stringed instruments, the bark and the tree ring formed immediately before the tree was felled are usually missing. In addition, transporting and drying the wood takes some time, and at least some tree rings from the periphery of the log are removed during wood processing and in the process of instrument making.

The defined end date of the sequence built from the measurement therefore only represents a terminus post quem, in other words the earliest moment in time when the instrument could have been made (in this case the year after the tree was cut down).

With your instrument, the question is whether it could have been built by Pressenda or not. Dendrochronology could be very helpful because if an end date after 1854 (the year of Pressenda’s death) is established, the instrument’s belly could not have been made by him.

However, a dendrochronological examination could give you some more information beyond mere dating. Laboratories in Europe have dated thousands of instruments and built large databases of ‘reference chronologies’ for trees from known localities. Based on this data, we have been able to build reference chronologies for different geographical areas, elevation levels and instrument makers.

For instruments made in the 19th century and later, we often observe a greater difference between the results of organological and dendrochronological dating. This may in part be due to the practice of maturing wood for instrument making for a particularly long time, which became more established during the 19th century.

If dates can be found for the spruce front of the violin, then two pieces of information can be obtained. Firstly, you will have a date of the wood of the front. You will therefore know that the front cannot possibly have been made before that date. This may allow you to rule out any early date attribution.

Secondly, the front may cross-match, possibly very significantly, with data taken from other instruments. If, for example, the wood matches very significantly with wood taken from another well-attributed Pressenda instrument – that is, if the statistics show close correlation and the pieces have similar dates – you can then assert that the dendrochronological information is consistent with the attribution given to you, and the attribution may well be right.

Having said that, it is not always true that if you do find that the wood on your instrument is almost identical to that of a well-documented instrument made by a particular maker, then he is the maker of your instrument. There have been many instances where people have been caught out by assuming that their instrument is by a significant luthier, based on dendrochronological information, only to be told that stylistically there is little or no similarity.

However, dendrochronological information about the front of your violin may be able to tell you more accurately about the country the instrument could be from, and, if not giving you the actual date of manufacture, it might possibly indicate a date based on violin making practice at the time.

John Topham is a UK-based dendrochronologist with a violin making background. He can be contacted on 01737 822341

Most early instruments were made with the wood from trees in Italy and Germany, but reference tree-ring chronologies are available from across Europe for other possible sources. If calendar dates can be confidently assigned to the tree rings in the instrument by matching patterns, then it is known that the violin could only have been constructed after the date of the outermost ring.

However, if the outer ring date is within or before the period of any particular luthier’s craftsmanship, then it is possible that it was made by that luthier, but only possible. For example, if the outer ring of a violin dates to 1725, then it was constructed no earlier than c.1740. The addition of a minimum of 15 years is estimated as the minimum number of rings removed from underneath the bark before drying and also in the crafting process, and the drying time before crafting (3–5 years).

The estimate gives the very earliest possible date of construction, and that violin could have been made any time from 1740 to the present, because there are trees that grow for more than 400 years and the rings in the violin may have come from the innermost rings of a very old tree. In this case the maker can only be determined by an expert who knows the maker’s designs and craftsmanship.

Carol Griggs is senior research associate and lab manager at the Cornell Tree-Ring Laboratory in Ithaca, NY, US: https://dendro.cornell.edu

From the April 2017 issue of The Strad