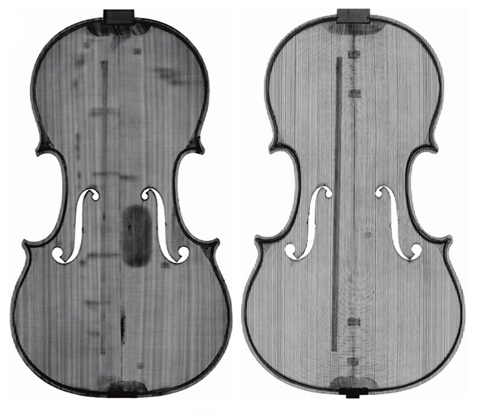 FIGURE 1 CT scan comparison of virtual front plates of the 1704 ‘Betts’ Stradivari violin (left) and a CT/CNC ‘Betts’ copy by John Waddle and Steve Rossow (right). The scans show a similar spacing between grain lines, which are narrowly spaced at the middle and widely spaced towards the edges

This extract is taken from the article ’Climate conundrum: Does wood from the ‘Little Ice Age’ account for the brilliance of Stradivari’s violins?’ that appeared in the April 2014 issue. To read the full article, click here

A subject that hasn’t been given much attention is the total weight of a violin. Musicians are sensitive to weight, and for good reason. A good player notices a difference of only one gram in a violin bow. Players are also sensitive to the total weight of the violin and quickly notice if an instrument is heavy or light. If a violin is heavy it is usually because the wood is too dense or too thick. This will have a dramatic effect on the acoustical quality of the instrument. In physics, a basic formula is F=ma where F is the force, m equals mass and a is the acceleration. How does this formula relate to violin making? If an object is heavier,  having more mass, it requires more force to get it to move. If it doesn’t move, it can’t be vibrating and if it isn’t vibrating, it is not producing sound.

For many years we have been weighing violins as they came into our shops and recording the type of fittings, since fittings would be a significant part of the weight. After weighing hundreds of violins we are able to observe that the weight for complete instruments can range from 400 grams to over 500 grams. For an object that doesn’t vary in size more than a few millimetres, a 20 per cent difference in weight is significant. We also notice that, with few exceptions, the heavier violins are less valuable student instruments and are less favoured by musicians. The lighter violins tend to be better quality and most preferred by musicians.

We have previously demonstrated that CT scanning of stringed instruments gives us a valuable, non-invasive technique that reveals many hidden features (see The Strad, May 2010). We have also recently shown that CT provides an accurate method of measuring the wood densities of top and back plates.

It is true that Stradivari often, but not always, used narrow grain spruce in his violins, mainly in the centre of the tops, as can be seen in a CT scan of the 1704 ‘Betts’ Stradivari violin top (figure 1). However, many other violin makers – those contemporary with Stradivari, and after him – have also used spruce with narrow grain, as illustrated in the comparison CT  scan of a CT/CNC-copied top of the ‘Betts’ made by John Waddle and Steve Rossow in 2012.

We find that spruce and maple with narrow grain can be acquired today in a variety of densities if one looks for it, and it is not difficult for makers to measure the density of a piece of wood using common tools and methods.

Read: The ‘Betts’ Stradivari: The progress of progress