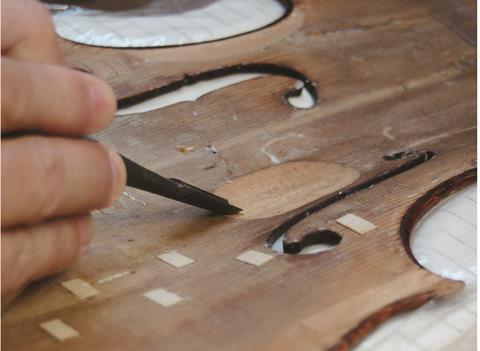 Taking a wood sample from a Guarneri soundboard

A new study has revealed the methods of wood treatment used by Antonio Stradivari and other Cremonese violin makers before crafting their instruments. Led by Hwan-Ching Tai, an international team of scientists used state-of-the-art technology to discover traces of chemical elements in the spruce tonewood used to make the instrument fronts, and even evidence that the wood’s molecular structure had been changed.

For the study, researchers used samples of wood taken during restoration work, including instruments by Stradivari, Nicolò Amati and Guarneri ‘del Gesù’. ‘Modern makers usually copy the shapes of Stradivari and Guarneri soundboards but not their thickness,’ the report states. ‘Many Stradivari and Guarneri soundboards appear surprisingly thin and light by modern standards. The average modern soundboard, made of unaltered, air-dried spruce retains approximately 3.0mm centre thickness to avoid cracking risks over time, or even up to 3.5mm in German schools. By contrast, Stradivari’s centre thickness range is 2.0–2.8mm, and Guarneri’s is 2.2– 2.9mm.’ This suggested the wood had been subjected to some sort of treatment before carving.

In analysing the spruce of a c.1740 violin by Guarneri ‘del Gesù’, the researchers discovered large traces of aluminium (1300 ppm), while Amati and Stradivari samples were below 50 ppm. Previous reports have also shown 700ppm aluminium in an Andrea Guarneri spruce. ‘This is best explained by chemical experiments involving family recipes, instead of buying pre-treated wood from lumber suppliers or random contaminations from later centuries.’

In heavily treated Stradivari specimens, the scientists found evidence of altered cellulose nanostructures. A Stradivari cello spruce had lost 95 per cent of its ‘second harmonic generation’ signals, which arise from the natural twisting of cellulose microfibrils. They are still strongly visible in the older Amati spruce. ‘Chemical treatments performed by Stradivari and Guarneri changed how wood fibre molecules are arranged and bonded together,’ the researchers concluded. ‘This should lay to rest any claim that Cremonese masters did not possess closely guarded manufacturing secrets. Is the tonal contrast between Stradivari’s brilliance and Guarneri’s sonority partly due to different chemical recipes?’ The paper acknowledged that additional experiments would be required to understand how thinner soundboards made of engineered wood might affect the tone quality and playing response.