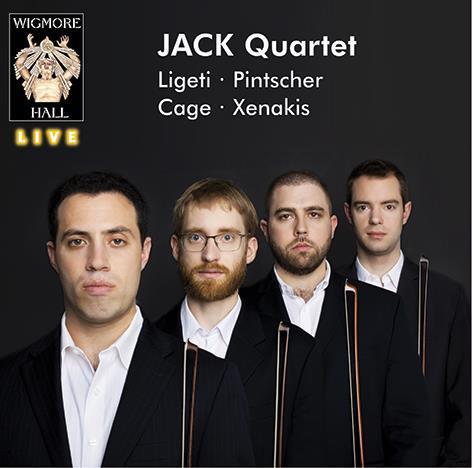 Taking on Ligeti, Pintscher, Cage and Xenakis in a single concert programme might seem brave to the point of recklessness, but the New York-based Jack Quartet has impeccable credentials. It already has under its belt a highly acclaimed disc of Xenakis quartets (see review in The Strad, October 2009). Ligeti’s Quartet no.2 comes across as intricate, with the players achieving just the right level of machine-like bleakness in the middle movement, in rich contrast to the creeping explorations of the final Allegro. Matthias Pintscher’s Study IV is ethereal and measured, with an expressive immediacy that comes from the players’ focused, intense approach.
Cage’s madrigal-like String Quartet in 4 Parts is phrased with the utmost delicacy and has moments of breathtaking stillness. After this, the Xenakis blows in like a tornado, vivid, violent and with boundless energy, the players seeming barely to notice its incredible technical demands.

The recording was made live at Wigmore Hall last year, but the sound is exemplary. The instruments have an appealing warmth, and the performance has all the spontaneity of a live concert but is blissfully free of extraneous noise – nothing short of magical.