A gripping programme that goes from light to depth of emotion 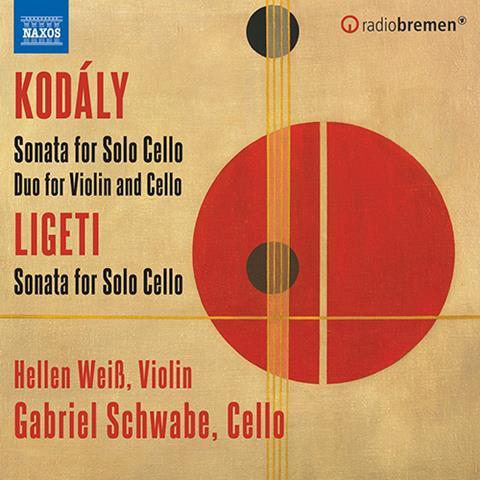 Description: A gripping programme that goes from light to depth of emotion

This is a delectable selection, moving by stages from the more ‘friendly’ sound of Kodály’s folk-inspired but markedly classical Duo to the disorientating double-stopped glissandos of Ligeti’s otherwise clean solo cello sonata and eventually the full scordatura schizophrenia of Kodály’s masterpiece. The playing is nothing if not highly considered, which itself amplifies the idea of a collapsing world order that takes root as the album proceeds.

Folk music is the pivot. Kodály pits different speeds against one another in the verbunkos dances of his Duo, which gets a performance more soulful than urgent here but one that is quite captivating. Two fine instruments (Weiss’s 1698 Gofriller and Schwabe’s Guarneri ‘filius Andreae’) and a third in the form of the heavenly acoustic of Bremen’s wood-panelled Sendesaal make for something very special when recorded as well as this. Weiss is able to conjure regret, anguish and black humour in counterpoint to Schwabe’s peaty sound.

In the Ligeti, Schwabe releases the lyricism in both the tunes and the bluesy glissandos, but could do more with the contrast in the second movement between motoric energy and otherworldly harmonics. He wastes no time trying to ape the scale of János Starker and others in the Kodály solo sonata, instead getting down among the details from the off. There is no intensity missing, but it’s here that steadiness, contrast and command start to wobble as they didn’t before. But if you’re not going to go all out in this piece, when can you?