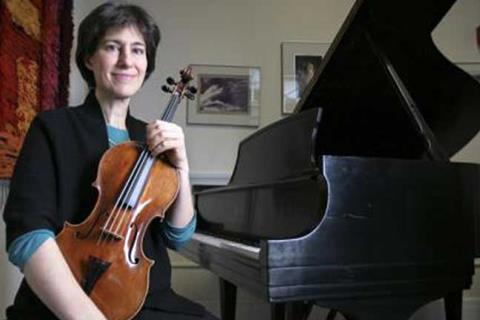 Born in Detroit of Armenian descent, Kim Kashkashian trained at the Peabody Institute in Baltimore under the tutelage of Karen Tuttle and the legendary violist Walter Trampler. She has also cited the teachings of Felix Galimir, with whom she has worked at the Malboro Festivals in Vermont, as a major influence on her musicianship. In particular her advocacy of contemporary composers such as Tigran Mansurian, Linda Bouchard and György Kurtág has been encouraged by Galimir. It was also at Malboro that Kashkashian met pianist Robert Levin, with whom she frequently performs and records. The pair won the Edison Prize in 1999 for their recording of the Brahms Sonatas. In 2012, she received a Grammy Award in the 'Best Classical Instrumental Solo' category for Kurtág and Ligeti: Music for Viola, on the ECM Records label. Kashkashian has taught viola and chamber music at the New England Conservatory in Boston since 2000. Kashkashian began life as a professional musician playing a viola by Emilio Celani, but as her concert career flourished she was able to obtain her present instrument, a Brothers Amati of 1617, from Pinchas Zukerman.