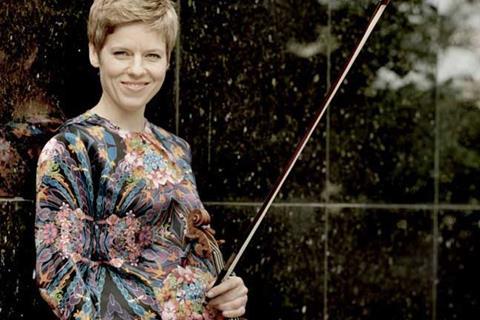 Isabelle Faust was born in Esslingen, Germany in 1972. As a teenager she studied with Denes Zsigmondy and Christoph Popppen and won the International Leopold Mozart Competition of Augsberg in 1987 as the youngest entrant. She then went on to become the first German violinist to win the Paganini Competition in 1993. Her success catapulted her into an impressive concert career, appearing with the Hamburg Philharmonic Orchestra under Yehudi Menuhin, the Berlin Radio Symphony Orchestra and the London Philharmonic among others. Faust is also a devoted recitalist and chamber musician and has performed across the world from Paris to Osaka alongside some great players such as Steven Isserlis and Joseph Silverstein. She made her debut album in 1997, playing the Bartók Solo Violin Sonata and Sonata No. 1 for Violin and Piano, with Ewa Kupiec, a recording that won the Gramophone Award of for 'Young Artist of the Year.' Her instrument, loaned by the Landeskreditbank Baden-Württemberg, is the Stradivarius violin of 1704 known as the 'Sleeping Beauty Violin.'