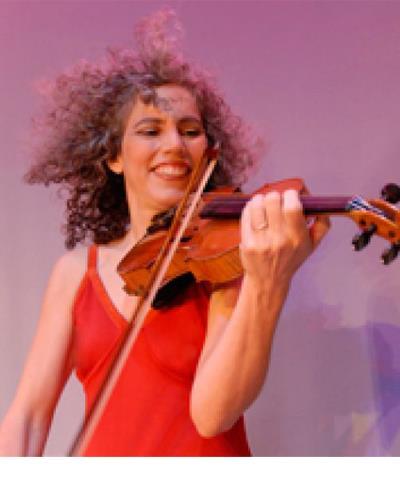 In the April issue, violinist and composer Alicia Svigals (right) hands on tips on performing klezmer, the traditional celebration music of East European (Ashkenazic) Jewry. To supplement her Masterclass article, here are six videos in which Svigals demonstrates the ornamentation and rhythmic variations described in the text:

Running semiquavers
Running quavers or semiquavers are often played in groups of two to a bow, a little faster than their notated value. Each pair is followed by a tiny silence to make up the difference before the next pair, which must begin right in time again. How ‘rushed’ those pairs are can and should vary.

Playing the zhok
The three quavers at the end of the 3/8 zhok (or hora) figure are played rushed, followed by a little silence before the down beat comes in again. This happens both in the band's rhythm section and in the melody.

The krekhts
The krekhts is unique among ornaments – there is no other tradition in the world with anything similar – and it is in a way the essence of the klezmer sound. Beginner klezmer players often find it mysterious, because it is so unlike any grace note they have encountered before: it is placed at the very end of the note instead of the beginning.

Slides
Klezmer fiddle playing is full of very short, subtle slides, which fill in the space between two notes rather than playing them cleanly. Mostly downward slides, they can be just a quarter-tone long, filling in the space for instance between an E flat on the D string and the open D, but they make a big difference.

Bends
Violinists, like clarinettists, will often add excitement to long notes by slowly bending the pitch down (by leaning the finger backwards) and then back up again. It should be as gradual as possible to create maximum tension. Sometimes a series of repeated notes are changed to one long, slowly bent note.

Trills
Klezmer fiddling doesn't utilise pure vibrato; instead, a half-step (or smaller) trill is used, which can be vibrated at the same time (keeping the two fingers together and vibrating, so the higher finger hits the string with each movement forward of the hand also does the trick).

Readers of The Strad’s digital edition will find hyperlinks to all six videos embedded within the text of the article. Download the April issue here, or get The Strad App for iPads, smartphones and tablet computers.