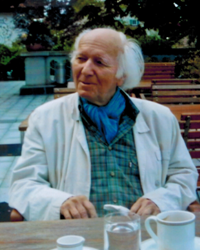 Hungarian violinist and pedagogue Dénes Zsigmondy has died aged 91. An acclaimed soloist who performed with some of the leading European orchestras, in later years he became a respected teacher at music schools around America.

Born Dénes Liedemann in 1922, he began learning the violin at the age of four. He studied with Géza de Kresz at the Franz Liszt Academy of Music in Budapest, before working with Carl Flesch, Váša P?íhoda and Zino Francescatti. In 1944 he moved to Germany to begin his performing career, when he also adopted his mother’s maiden name, Zsigmondy, to emphasise his Hungarian roots. Among the composers he counted as personal friends were Bartók, Kodály, Ligeti and György Kurtág.

From 1946 Zsigmondy had an international career as a soloist, performing throughout Europe and in the Americas, Japan, Australia and New Zealand. Among the orchestras he performed with were the Berlin Symphony, Munich Philharmonic, the Salzburg Camerata, Stuttgart Chamber Orchestra and the Boston Philharmonic. He also gave duo recitals with his wife, pianist Anneliese Nissen, who died in 2014.

In 1972 Zsigmondy joined the music faculty of the University of Washington in Seattle. He was also a visiting professor at Boston University and held masterclasses in cities from San Francisco to Hong Kong. In 1978 he founded the Holzhauser Musiktage festival in Bavaria, where he relocated.  Among his pupils during this period was an eleven-year-old Isabelle Faust, who came backstage after a duo recital.

In his later years Zsigmondy taught at the Hochschule für Musik Mainz. In 1997 he received the Order of Merit of the Republic of Hungary.

Isabelle Faust pays tribute to Zsigmondy for The Strad below:

'When I listen to the recordings of Dénes Zsigmondy – his Bartók, Dvo?ák and Mozart Sonatas, Ravel's Tzigane and many more – my heart is filled with a desire to make music and to immerse myself in the works. Dénes was a full-blooded musician – he breathed in music, existed through music, and was simply contagious in his hunger for music. When he took his fiddle in hand, no one could resist its intensity. I came into contact with his radiant, contagious force for the first time as an eleven-year-old. For many years he was with me – loving and wise – and the spell continues to this day. His skills as a violinist and his extraordinary talent profoundly touched and impressed all who heard him in concert. As a teacher, in his later years, he played an equally important role in the world and I have met many former students who he influenced immensely. We all miss him painfully – his nature and his music are deeply rooted in each of us.'