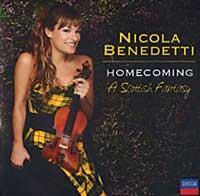 Without a violin concerto as its usual coupling, it would be unfortunate if Nicola Benedetti’s joyous performance of Bruch’s Scottish Fantasy were overlooked. Having lightened the solemnity that often overloads the opening movement, her scherzo bubbles with happiness as she casts aside the technical aspects, in playing full of exciting brilliance. Keeping sentimentality in check through the following Andante sostenuto, she gleefully conveys the world of the Highland dance in the exhilarating finale. Rory Macdonald and the BBC Scottish Symphony play a positive and colourful role, and the sound is admirable.

‘Homecoming’ continues the exploration of Benedetti’s Scottish roots with a mix of popular and traditional melodies that include ‘My Love Is Like a Red, Red Rose’, ‘Bonny Banks of Loch Lomond’ and ‘Ae Fond Kiss’, the orchestral arrangements often more akin to a Hollywood film view of Scotland.

With a small backing group she then turns her nimble fingers to folk dance music, and puts her dexterity to good use in Phil Cunningham’s soulful ‘Aberlady’ and ‘The Gentle Light That Wakes Me’. To seal her Scottish credentials she joins with the singer Julie Fowlis in the wild musical world of ‘Bothan a bh’aig Fionnghuala’.