Can these new tailpiece designs raise the tonal game of your instrument?

Until recently, the importance of an instrument’s tailpiece was barely realised. Vicky Sharpe talks to some of the craftsmen who have been experimenting with different materials and designs to help maximise an instrument’s sound quality 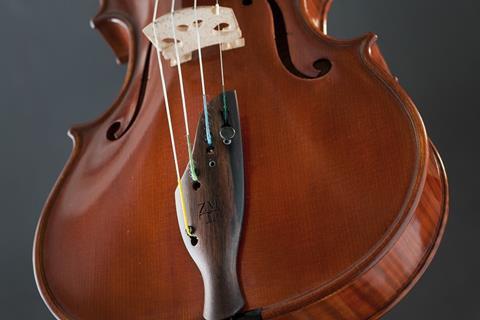 The tailpiece: an accessory that has perhaps been taken for granted in the past, although it’s essential for all stringed instruments. To the uninitiated it’s something that has always been there, anchoring the strings while matching or complementing the pegs, fingerboard and, in some cases, the chin rest. Yet, as any instrument and fittings maker will tell you, the tailpiece can significantly affect the sound of the instrument, and as a result it is something they are always trying to develop, update and tweak.

New York-based cellist Kenneth Kuo has recently released a carbon-fibre tailpiece which, he believes, represents a new step in tailpiece design: it can be ‘tuned to a specific pitch’. This is achieved through altering the tailpiece to change the frequency at which it vibrates – although exactly how he does this is, naturally, a trade secret.

‘When you tune the tailpiece you can enhance and help the weaker notes on the instrument,’ Kuo explains. ‘For example, if a C string is dull and the tailpiece is tuned to a C, the sound gets more “oomph”, more volume and fullness. It will also affect the overtones associated with the note.’ 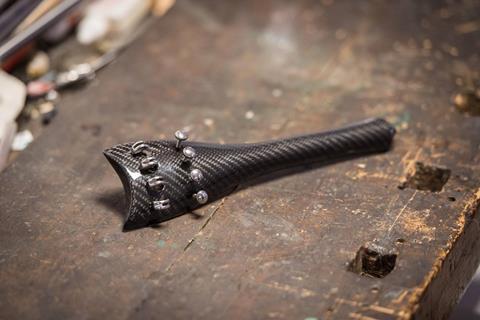 Kenneth Kuo’s tailpiece can be ‘tuned’ to a specific pitch

The shape of Kuo’s tailpieces also differs from that of a traditional tailpiece. Each one has an asymmetrical curvature, similar to that of an instrument’s bridge. Kuo took his inspiration from the bridge and believes that the shape evens out tone across an instrument. He says: ‘If you look at “standard” tailpieces they are all symmetrical. Why? The bridge isn’t symmetrical. The second lowest string is at the highest point. This means those strings have the highest drop-off point and so their sound is harsher. There isn’t an even tone across the strings. An asymmetrical tailpiece means the pressure is different and the sound is freer.’ He also believes that a symmetrical design might even contribute to the production of wolf notes.

The ultra-light tailpieces are made from layers of carbon fibre and resin. The models for cello, for example, weigh only 30g when taken out of the mould, before trimming, shaping and final adjustments. According to Kuo, these cello models can weigh as little as 21g and still hold the string tension. This low weight, he says, allows the length of string behind the bridge (the after-length) to behave differently. ‘Being light and strong, the tailpiece can transmit the vibrations of the after-length back to the bridge, whereas previously they were muted by heavier tailpieces,’ he says. ‘Until now it’s as if we’ve been playing with mutes on our instruments.’ 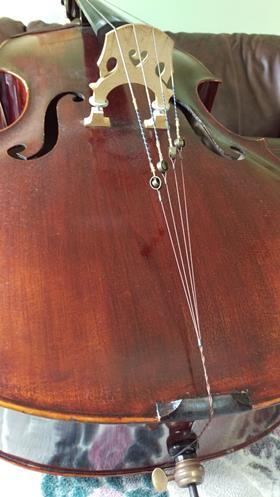 Some manufacturers have pioneered even more radical designs. Vermont-based double bassist and tailpiece producer Kevin Marvin, for example, did away with the solid body and shape of the traditional fitting for his lightweight metal tailpiece. Originally designed for bass, and now adapted for cello, his tailpiece uses four strong but flexible stainless-steel cables, commonly used in the fishing industry, attached individually to each string by brass rings. The cables connect together in a short braided section, which passes over the saddle as a single cable and then loops around the endpin.

Marvin’s design is based on the assumption that the traditionally heavy bass tailpiece mutes or dampens the vibrations of the strings. ‘To optimise the sound, one must maximise the amount of energy from the vibrating string that reaches the top table of the instrument,’ he asserts. ‘It is the vibration of the top table that ultimately generates the sound.’ Marvin felt that if he could reduce the mass of the tailpiece, he could maximise the energy produced and therefore improve the sound.

The idea for the design came after Marvin saw another bassist using a similar mechanism, but with heavy cables.

‘The resulting sound was terrible, with too many sympathetic vibrations, which can create wolf notes and unwanted noise,’ he recalls. But he took the idea forward and found that lighter cables helped, as did combining them into a single braided section. He also suggests using (and provides with the tailpiece) a buffer made of a soft, felt-like material to reduce the vibrations further – although he says many players prefer the natural look, with the wood of the instrument on show between the cables.

According to Marvin, his design also allows for a more even bridge vibration. He believes that the traditional tailpiece has an unwanted stabilising effect on the vibrations of the strings behind the bridge. The cables of his design, however, have greater elasticity, allowing the strings to continue to vibrate behind the bridge. He adds that the elasticity makes the instrument easier to play, as less pressure is required to depress the strings. 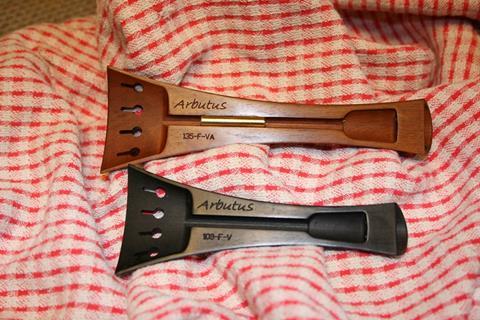 Like Kuo, Canadian violin and fittings maker and researcher Ted White has created a new form of tailpiece out of a composite material. But unlike Kuo and Marvin, his main motivation wasn’t sound or weight. He wanted to create a tailpiece from a more environmentally sustainable material. He has created a double bass tailpiece made from recycled paper and the resin of cashew nut shells. The green, renewable material, according to the maker, acts in the same way as wood and has similar properties – wood is made up of cellulose fibres and a natural resin called lignin. ‘My objective is to reduce the stress on our forests, especially tropical hardwoods,’ he explains. ‘People love beautiful wood, as do I. But we have a responsibility. Maple and spruce are sustainable for making instruments, but tropical hardwoods are declining. This is a good alternative.’

‘My idea is simple: keep the material properties constant and adjust the design instead’ – Ted White

The new models look exactly like a traditional wooden tailpiece, and White says that some makers who have seen it were unable to tell the difference. The design is the same as that of his (wooden) Arbutus tailpieces, which feature an adjustable-weight system on the underside; players can slide the 3g weight along the vertical axis of the fitting. As with Kuo’s design, the weight alters the pitch at which the tailpiece vibrates, and there is no need to adjust either the after-length or the tailgut. Additional weights can be fitted if desired. ‘If you match the pitch to a strong resonance, such as a wolf note, it will absorb some of the energy, thereby helping to tame it,’ explains White. ‘It can also help to even out a less-challenged instrument.’

Like White, tailpiece maker Nicholas Frirsz has another agenda alongside sound production with the release of his latest model: the price. The cost of non- traditional materials is often high and working with them can involve expensive production techniques. To counter this, Frirsz has developed a nylon-based composite cello tailpiece called the Acousticon, which he launched at this year’s Namm show in California. It costs only $50 and is significantly more affordable than his signature $349 alloy cello tailpiece. 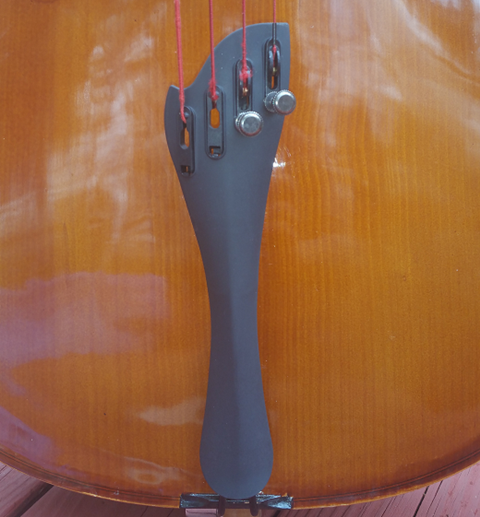 The original Frirsz cello tailpiece, made from an aluminium-based alloy, is designed to enhance projection, balance and response, with a cut-out design that lightens the tailpiece and opens up the sound of the cello. The strings’ after-length progressively increases as the strings get thicker, and the whole tailpiece has a lower, flatter profile. It also has a built-in ‘twist’ in the area where the strings attach, which redistributes the downward force on the bridge.

By contrast, the Acousticon is made from a high-tech, injection-moulded composite that is intended to create the right balance of stiffness, stability and weight. ‘It’s also lightweight, and has the same geometry, but it is much more affordable,’ Frirsz says. ‘One of the requirements was that it should be very stable. I have tried all kinds of composites – laminates, plastics, carbon fibre, every material you could imagine. I’ve found that this is the best for consistency, both because sound travels through it at a faster rate, and it is a stable and repeatable process.’ However, he says that the weight and dimensional stability of the alloy tailpiece mean that it will still produce the best results in terms of projection, wolf reduction and fullness of sound.

Although the use of composite or non-traditional materials is widespread among tailpiece innovators, there are also innovations being made in the use of wood. Double bassist Zoran Marković makes his tailpieces in ebony and rosewood. His design focuses on the after-length of each string, which varies according to

‘The point where the strings are attached to the tailpiece is calculated so that they can create the most energy, enriching and supporting the basic tone,’ Marković explains. This increases the after-length of the lower two strings, which ‘results in a richer, more profound and extended vibration across the entire overtone series’. He also says that the varying string lengths result in more evenly dispersed sympathetic vibrations, reducing wolf notes. 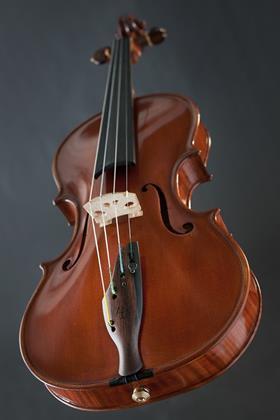 According to Marković, the design reinforces an instrument’s natural harmonics and varies the acoustic load on the bridge, improving the transfer of vibrations from the strings to the soundboard. ‘We have observed an increase in the balance between medium and high harmonics, a quicker response to the attack of a note, and a more balanced sound, produced because of the efficient acoustic load,’ he says.

The initial idea for the design came after Marković had the opportunity to try the famous 1590 Gasparo da Salò bass that once belonged to Domenico Dragonetti. In awe of the sound created by the instrument and its gut strings, he ordered gut strings for his own bass in the hope of recreating the sound. When he found that they actually made a small sound, he tried a shorter tailpiece. ‘There was unbelievable resonance, with a faster response,’ he recalls, which put him on the road to designing his own tailpiece.

But what’s next for tailpieces? Is there room for further development in the future? Marvin is hoping to produce cheaper nylon-based models one day: ‘They would behave in the same way as stainless steel, with the same elasticity, and could be more easily produced.’ Kuo and White are both working on models that can be adjusted once made.

For Kuo, a heavier tailpiece that can be adjusted in three ways while still on the instrument is close to production. The piece will allow for alterations in the length of the tailgut, the individual after-length of each string, and the overall weight (starting at 50g and increasing in 5g increments to 450g). ‘There’s so much variation in a tailpiece,’ says Kuo. ‘They always have to be adjusted, and taken off the instrument to do it. Then you forget what the sound was like, and you can’t easily compare.’ White, meanwhile, is developing a model where the structural stiffness of the tailpiece can be adjusted. ‘My idea is simple: keep the material properties constant and adjust the design instead,’ he says. ‘The tricky part is that you need to keep the mass and centre of gravity constant as you do so. In the end I hope to have a design that allows the player to tune the tailpiece, via the adjustable-mass system, to match the main body resonances (for wolf control) and also to tune its structural stiffness to adjust tonal colour. Being able to adjust that stiffness will be a joy for violinists.’

Please note, this article was first published in 2006 so prices may have changed