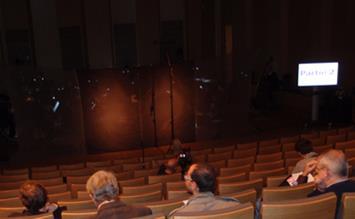 Rigorous is the first word that springs to mind when summing up yesterday's violin listening test in Paris – the follow-up to the Indianapolis blind-test of two years ago. How else to describe the process of assessing the projection of pairs of violins – with an unwavering format of ABAB comparisons of solo and orchestral excerpts – for nearly two hours?

About 70 players, makers, dealers, critics and enthusiasts gathered in the Auditorium Coeur de Ville in Vincennes to hear seven soloists and an orchestra of around 30 players perform behind a thin black mesh screen. The soloists included Ilya Kaler, Elmar Oliveira, Solenne Paidassi and Tatsuki Narita, second-prize winner at this year's Queen Elisabeth Competition.

We weren't told how many instruments we would be listening to, or how many were new and how many old, but in any case, getting the violins, soloists, orchestra, conductor and technicians together for the event was a logistical feat for which the organisers – Claudia Fritz, Joseph Curtin, Fan Tao and their team – deserve a lot of credit.

So to the listening. In the first two parts of the test the audience was asked to compare pairs of violins to see which projected better. 'Define projection,' someone requested. 'Puissance (power),' said Fritz. I thought that differences in power would be easier to notice when the violin was playing with the orchestra, rather than just solo. Sometimes that was the case, but there were times it was not. I found it very hard to separate some of the violins – many had problems cutting through in the higher registers – and on the sliding scale we were given to mark our answers (from 'A is very superior to B' to 'B is very superior to A'), I never strayed as far as either end.

Parts three and four of the test moved on from measuring a projection to judging, respectively, which of two violins best suited the musician performing (and why), and whether a violin being played was new or old (and why). Now this was more interesting, and somehow easier, now that I was able to qualify the sound, and not just quantify it. And yet, when deciding between new and old, it was a challenge to banish some assumptions: why shouldn't that dark, powerful, Guarneri-sounding violin with a lovely rich mid-range be a new instrument?

At the end of the new-or-old test I compared notes with my two nearest neighbours. We all somehow had the same answers (and no, we hadn't cheated). But doubtless those answers won't all have been right – at least if the results of the Indianapolis test are anything to go by.

Throughout the event, the soloists were blindfolded when they played. I hope that they were given the chance to state their preferences after each comparison. It would be fascinating to see how their impressions of the instruments compare with those of us in the audience (all will, I hope, be revealed in the next paper from Fritz et al).

Were you at the test? What did you make of it? Let us know.