Tan Dun and Eldbjørg Hemsing on their latest collaboration

Chinese composer Tan Dun’s new concerto for Norwegian violinist Eldbjørg Hemsing draws on traditions common to the homelands of both artists. Andrew Mellor speaks to them about this latest in a series of collaborations 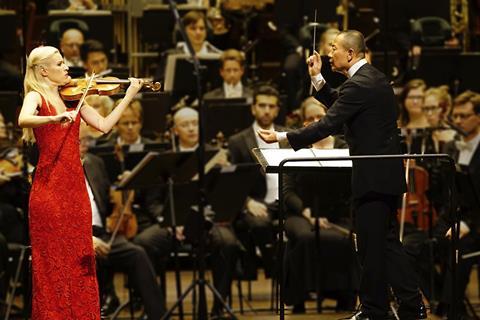 It is a Norwegian who has inspired the latest violin and orchestra work from Tan Dun, the Oscar- winning Chinese composer. Eldbjørg Hemsing is a superstar violinist in her own country, where her popularity extends far beyond classical music circles thanks to a documentary on Norwegian violinist Ole Bull, made in 2010 with her sister, Ragnhild (also a violinist), that aired on Norwegian television.

Hemsing first collaborated with Tan at the World Expo in Shanghai in 2010, performing his violin concerto The Love (2009) with the Trondheim Symphony Orchestra conducted by the composer. The collaboration turned into a fertile meeting of minds and the two have met and worked together several times each year since.

The new work unveiled in Oslo, the violin concerto Fire Ritual (2018), was written expressly for Hemsing and shaped considerably by her input.

You play the erhu almost like a cello and the sound is really particular: it has a distinct way of singing the notes

[Close] to home for Norwegian musicians are Tan’s constant references to folk music. He is careful to point out that folk music is non-territorial – that ‘it all comes from the same place’ and its constituent scales are mostly universal.

There are elements of Fire Ritual that use drooping, decaying techniques for both soloist and ensembles – downward, diminuendo glissandos at the end of a phrase that give the effect of said phrase disappearing like smoke. These techniques can be found in certain vernacular performance practices in both Norway and China. ‘If there is something technical like that which is not based on the usual scale, then you have to place your fingers differently and that requires different thinking,’ says Hemsing.

Tan’s writing for the solo violin is shaped by his training on the standard Western instrument but also by his experiences playing the Chinese stringed instruments, including the erhu, which Hemsing has also played.

‘The erhu really surprised me,’ she says. ‘You play it almost like a cello and the sound is really particular: it has a distinct way of singing the notes. It took me some time to find that way of playing it so that it doesn’t sound too staccato or too learned. It has to sound organic and fluid. It’s extremely interesting to see how those same techniques worked on a Western violin; that is a very inspiring thing to explore.