Following her win at the Tibor Varga Competition, the 23-year-old Danish violinist talks about her background, ice-skating, David Attenborough and practising with purpose 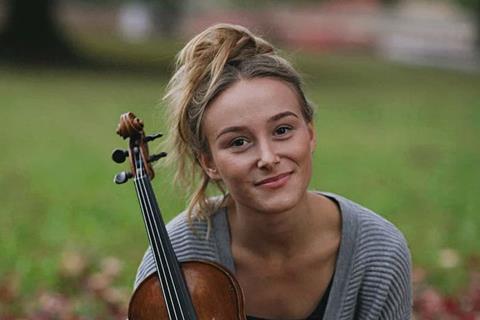 I didn’t decide. My Dad is a classical saxophonist; my mum is a choir conductor and an organ player, and works in a church in Copenhagen. All three of my brothers play musical instruments. So I was always surrounded by music. And my Dad, since forever, had wanted a daughter who played the violin; it was just this fantasy of his. So since I was the only girl in the family, that daughter was me. Then eventually the violin became such a big part of my life that it seemed only natural to keep going.

How did you motivate yourself to practise?

I think my Mum was quite good at making me practise in the beginning! Eventually it began to feel more normal and when I started studying the violin after high school it was all me and my own intiative. Nowadays there are some periods when it’s really easy and all I want to do is practise, but after a competition I always want a break and it can be difficult to start again. That’s when I call my Mum. She has an attitude that makes you want to work and practise and become better. She’s like a coach. So now whenever I go to competitions or travel for concerts, I always take her with me.

How do you mentally prepare for a competition?

I try not to think of it as a competition because as soon as I start comparing myself to others it brings me down. It’s easier to think of it just as a series of concerts where I’m supposed to play really, really well.

When I was little especially I was a huge fan of David Oistrakh. Every time I had to learn a new piece I would look up his version on YouTube and still now I think he had something really special in his sound: the warmth and the clarity. It never sounded as though he was making a big effort, but at the same time it wasn’t a small sound. It was always really open and strong, and there was a sureness in the way he stood that I really like.

I’d love to play the Khachaturian Concerto. It’s one of the few pieces that I discovered myself: when my teacher asked what I wanted to play I went on YouTube, found a clip of Oistrakh playing it and fell in love with it. I especially like the second theme of the first movement: it’s so beautiful and lyrical and has a touch of Armenian folk.

It’s a Gagliano from 1763. I’ve had it on loan for six years and it has a really big sound; it projects so well. Sometimes people think I’m playing the viola because I’m not so big and the violin is quite big. I call it ‘the beast’.

Always practise with a purpose. It’s quite easy to get carried away by the music, and if something doesn’t work, just to play it again rather than asking yourself why it didn’t work. With that approach, you might get lucky: something will eventually work and then you just move on. But then when you perform the piece everything feels quite hit-and-miss, which is very frustrating.

So to get rid of that feeling you have to have everything under control and focus on problem-solving in your practice. I used to do a lot of ice-skating and if I fell while doing a jump, my coach would always tell me what was wrong: that the knee wasn’t high enough for example, or that my foot was not placed correctly. So I try to transfer that mindset to the violin.

What do you do in your spare time?

There was a time when I was very into the ice-skating: I had training eight times a week with ballet classes and muscular training classes. But I had to stop after seven or eight years because I got a knee injury. I cried a lot when I realized I couldn’t continue. Nowadays the violin doesn’t leave me with a lot of extra time and energy, but whenever I can I love to do some rope-skipping. When you do it to music it sort of feels like dancing.

Other than that, I like to watch documentaries about nature and animals and the universe. I grew up watching David Attenborough – we love him in Denmark. It’s nice to discover the beauty in the world and think about the fact that there are so many things going on around you that you’re not generally aware of.