Moonkyung Lee: add a 21st-century miniature to your recital 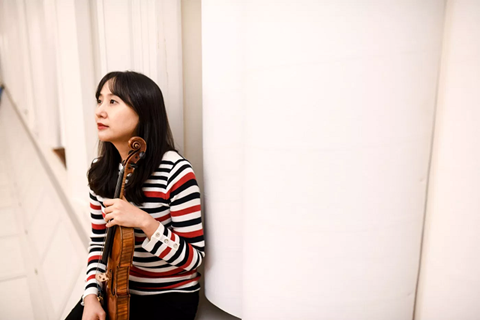 The title of my new recording Parts to Play comes from a couple of concepts. First is the musical relationship the pianist and I have in each part, over the course of the album. Secondly, and possibly more importantly, the concept comes from the saying ‘we all have a part to play’.

I think that by combining core repertoire with new works (Prokofiev’s Sonata for Solo Violin amid compositions from six contemporary composers which collectively represent three decades of works), I am doing my part to enhance the violin’s repertoire.

Grammy Award-winning composer Michael Daugherty (b.1954) wrote Viva for solo violin on commission by violinist Vadim Gluzman, who gave the world premiere in January 2012. This playful short piece (about 2’30”), is largely in two tempi, ♩ = 132 and ♩ = 66.

However, the faster tempo is played for the majority of time while the slower tempo is played for only a short period of time in transitional sections, in which new articulations such as the artificial harmonics and pizzicatos are introduced. Overall, the piece has a very exciting and upbeat atmosphere.

The opening chordal measures, which are often interrupted by the two measure rhythmic ostinato, are characteristically very dense and percussive. In this pesante segment, which incidentally is marked all in down bows, while keeping a firm grip on its character, it is also very important to maintain the resonance for each chord and not make it sound too rough. For that, I would suggest making invisible circles upward with the right arm on each chord to make it ring with a vibrato on each of them, with the left hand as well.

In a short brilliant solo piece like this it is very important to emphasize dynamic differences, as it is one of the very obvious hints that a composer is giving us. For example, in the opening section, the dynamic difference between the heavy chordal measures and the two measure rhythmic ostinato is very clear; the former is marked forte and the latter mezzo piano.

Furthermore, what will also be helpful is to show a drastic change between the two tempi. In the faster rhythmic tempo, it is very helpful to keep the steady tempo (the tempo is already so fast, and the rhythmic materials speak for themselves, therefore there is no need to overdo it) while taking enough time during the slower tempo and ritardandi, enjoying different nuances of various articulations.

In short, Viva is a perfect contemporary piece to include in your recital repertoire.