Becoming a better and happier musician through mindfulness and yoga

Violinists Elena Urioste and Melissa White’s musical lives have been transformed by yoga, finding both body and mind freer and more resilient against the rigours of life as a professional musician

Until a few years ago, neither of us had never given much thought to the idea of mindfulness, paradoxical as that may sound. The concept was undeniably appealing, as one never wants to live thoughtlessly, or without exhibiting care for oneself, others, and our surroundings; but we had no idea how to go about practicing it, or even what it meant, really. The cynics in us wondered if the concept bordered on hokey: surely practising mindfulness was a gateway drug to healing oils, crystals, and statements like ‘My chakras feel so open today!’ (For the record, we both now enjoy, say, and are enthusiastically prepared to defend all of the above.)

Despite its New Age-y associations, mindfulness is an incredibly broad term, and a personal one at that, much in the way that spirituality encompasses a vast territory yet is highly specific to each individual. To the two of us – dear friends, fellow violinists and yoginis, and now co-founders of Intermission Sessions & Retreat – mindfulness simply means that we are moving through our lives, musical and otherwise, with awareness, engagement, and care.

Classical musicians have been taught from an early age that making music is an emotional undertaking, and as we progress through our studies, an intellectual and scholarly pursuit; unfortunately for most of us, nowhere along our journey has the importance of physical care been emphasised. In case there was any doubt: musicians are athletes. One glance at us once we’ve walked offstage – exhausted, dishevelled, drenched in sweat – confirms that we’ve not only been pouring our hearts into our music, but also our bodies. Thus, like athletes, we should be encouraged to nurture, prepare, and congratulate our bodies for performing those miraculous feats of which they are capable.

Without getting too specific or pointing fingers, the field of classical music is still suffering from a tradition of playing and teaching that promotes a ‘play through the pain’ mentality. If we miss a note, we’re supposed to drill it a hundred times in the practice room to ensure that we’ll never miss it again, forever and ever amen. It’s good to practise for four hours, right? Why not do SEVEN!? We trudge through pages of thirds and octaves and tenths until our hands atrophy, not once stopping to stretch our arms or question how any of this might be serving The Big Picture. 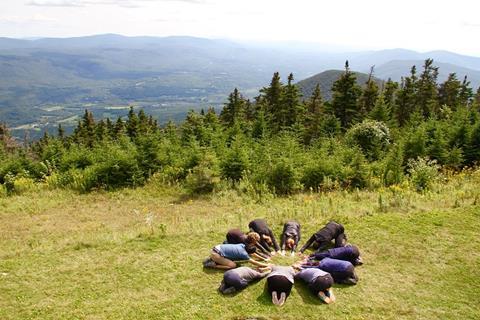 ’Like athletes, we should be encouraged to nurture, prepare, and congratulate our bodies for performing those miraculous feats of which they are capable’

Athletes, on the other hand, do everything in their power to keep themselves in peak condition: they stretch before and after practices, games, or performances; they strategically counteract the motions they do for hours upon end; they receive bodywork and physical therapy; they eat sensibly; they rest. After all, athletes are their own instruments, their bodies vehicles for self-expression. But despite even the best upkeep, bodies can malfunction, and the longer we push the body when compromised, the greater the ramifications over time. Athletes also seem to understand that while injuries are of course devastating – to their teams, families, fans, and most of all to themselves – there is certainly no shame in admitting to pain or fatigue, and nothing productive can come from avoiding the subject.

Musicians are much more shadowy regarding lapses in physical health. Is it because we’re afraid that employment opportunities might slip through our fingers if we require a few days, weeks, or even months off? Are we embarrassed to admit that we may have been doing something wrong? Will our colleagues or mentors view us as weak? Or are we naïve enough to believe that the body is just supposed to behave perfectly for us throughout decades of repetitive motions?

Musical institutions are gradually becoming wise to the fact that some sort of mindfulness or wellness component might benefit their curriculums, though few have managed to implement the concepts in ways that permeate or encourage symbiosis with the music itself. Musicians of all ages are at risk of injury, strain, or burn-out; yet for some reason the stigma surrounding these afflictions still renders the topic largely unapproachable in our field. Applying mindfulness of any flavour – being focused, thoughtful, kind, gentle, in touch with a higher power – to our craft, particularly in the way we approach our instruments physically, can be the first step towards a much more positive experience creating and performing music.

For the two of us, mindfulness means that we are truly paying attention to what is going into and coming out of our instruments. It means never operating on auto-pilot, drilling passages just for the sake of it, or clocking an arbitrarily high number of hours in the practice room in the hopes of impressing our friends or fans. Mindfulness means caring for our bodies, focusing on our breath, never playing through pain, and truly observing, with curiosity rather than judgement, what is happening physically and musically. Accessing a mindful state has not always been easy or straightforward, and though there are any number of pathways towards mindfulness, the key to our own discovery was through a deep and extensive exploration of yoga.

Unbeknownst to each other, the two of us stumbled upon our respective yoga practices at exactly the same time in two different cities. Upon discovering each other’s new passion for yoga, we added this to our list of commonalities (we both discovered the violin via Sesame Street, attended the Curtis Institute and ENCORE School for Strings, and are past winners of the Sphinx Competition) and began to practise together whenever our schedules allowed. Over the past eight years, the benefits that we have both experienced have been innumerable, from improved muscular control in our violin playing and an increase in self-discipline to a greater sense of peace with the world in general. Both active teachers within our respective musical careers, we have often found ourselves advising students to employ principles that we’ve learned in yoga classes as much as those from our own musical studies. The truth is, the two fields are inextricably linked, and out of this realisation our idea for Intermission Sessions & Retreat was born.

We often reminisce about our formative years of musical training and how, when we were at the apexes of our practising careers (quantitatively, that is; certainly not in terms of sensibility or productivity!) and our muscles and joints were at their most impressionable, we wish we had been introduced to a gentle, mindful yoga practice to help us become better attuned to our physical selves. We might have discovered at the age of 16, rather than 30, how to plant our feet onstage in a way that afforded a greater sense of stability and calm. We might have learned how to breathe from the bottoms of our lungs to more effectively calm our nerves and thus eliminate years of bow-shaking. We might have known to treat our bodies with respect and compassion instead of being wilfully ignorant about what exactly was causing us pain and how to remedy it. With each passing yoga class, we become more attuned to our bodies, our breath, and when we’re really paying attention, the true peaceful centres of ourselves. We are so eager for our students and colleagues to discover these and countless other benefits. 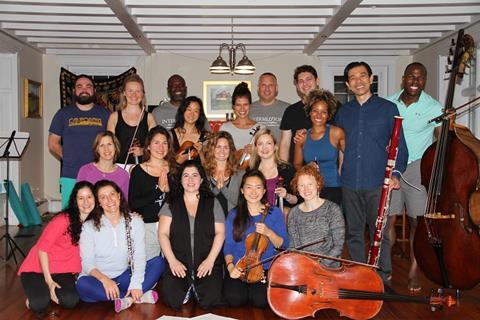 ‘A week of yoga, meditation, and being in the presence of other open, curious, supportive musicians revealed a place of true peace within all of us’

To briefly summarise Intermission Sessions & Retreat, all of the above concepts and more are explored through the program’s two branches. In a series of capsule Sessions in conjunction with other musical institutions (schools, festivals, orchestras, etc), we lead students through light yoga workshops, discuss how a regular yoga practice can be beneficial for musicians, and conduct instrumental masterclasses with an emphasis on transferring what we’ve learned on the yoga mat to music-making, particularly with regard to posture and breath control. For the professional set, we offer Retreats, week-long getaways for seasoned musicians to come together in a supportive, peaceful, communal setting to practice yoga, hone their crafts, and share creative ideas – a sort of yoga retreat meets artist colony. We recently hosted our inaugural Intermission Retreat in Manchester, Vermont for a total of 17 open-hearted, curious musicians, practicing yoga twice a day as a group, making music, and sharing thoughts about how regular yoga, meditation, and mindfulness practices could potentially deepen all of our relationships to music. While the experience as a whole was too magical to describe adequately – and yes, we did discuss and meditate on our chakras and it was AWESOME – we did take a few notes over the course of the week. Here are a few observations:

However meaningful it had been before, yoga has redefined itself to both of us in the past month. A true, honest yoga practice (which has nothing whatsoever to do with putting the body into fancy, Instagrammable shapes) encourages the body towards an optimal physical state so that whatever is residing inside – music, ideas, feelings, stillness, love – may become uninhibited and limitless. A week of yoga, meditation, and being in the presence of other open, curious, supportive musicians revealed a place of true peace within all of us, available to escape to whenever necessary: while practicing a particularly stressful passage of music; during moments of emotional trauma, past or present; or onstage during a harrowing performance. Yoga has freed up the space and energy to be able to move gently, observe without judgement, and think, act, and play with true mindfulness.

Next Sessions:
11 October 2017 in Philadelphia, PA in conjunction with Project 440