Cultural learnings from Russia's ‘window to the west'

When the Calder Quartet was invited to visit St Petersburg, its players leaped at the chance to learn more about the music they grew up playing. Violinist Andrew Bulbrook shares the struggles and rewards of visiting Russia 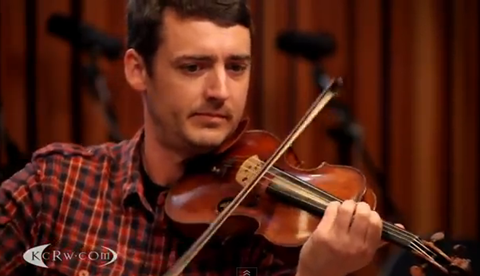 Many of us grew up studying with Russian teachers at different points in our education, so when the St Petersburg Conservatoire and the US Consulate invited us to visit St Petersburg, we were excited to have the chance to understand Russian culture more deeply. St Petersburg is beautiful. Italian architecture abounds and canals flow through the city. Statues of composers are not hidden away inside music schools and concert halls, they are on the streets, in the squares, and major roads bear their names.

Small differences set St Petersburg apart from other European cities that it resembles. You have to be careful where you walk as there are no cones for roadworks and there might just be a hole in the ground or a chunk of concrete right in front of you. The facades of the buildings are beautiful and well painted, but look deeper into the courtyards and you will see peeling paint and parked cars with long-standing flat tyres. The shuttle bus that picks you up at the airport has a window cracked all the way through, and customs is intense. You have to be extremely careful when declaring your instruments: you must bring photographs of instruments and bows to be signed and stamped on entrance and declared on exit, and do not lose your paperwork while you are there as you need it to exit the country. All the forms look like they were made on a photocopier from 1989.  The Calder Quartet has travelled to Mexico at the height of the drugs war and even toured Colombia. Russia was hands down the most difficult country to visit.

Funding is hard to come by. The St Petersburg Conservatoire, populated by caring and dedicated teachers and talented, polite and wonderful students, relies on funding from other governments and music schools to bring international artists to its programmes. It’s a convoluted process that results in many cooks in the kitchen and much miscommunication. No one is able to take responsibility for his or her actions. I mention this because so much of our time there was spent sorting out misunderstandings, and funding was only finalised three weeks before we were supposed to arrive. Visa applications are massive and the number of days spent working on them easily exceeded the number of days we were on the ground in St Petersburg. Perhaps this is why it is so difficult for musicians to visit Russia these days. Another idiosyncrasy is that while Russia is home to many incredible works of art (The Hermitage Museum is an absolutely magical place) and has oligarch collectors buying great works of art and paying record prices for musical instruments, the bottom has fallen out on their sponsorship of classical music performance. There are available funds for hard, transferable assets but not for intangibles like live music. This may explain why instruments brought in by musicians are so heavily scrutinised – to make sure wealth isn’t leaving the country. None of this helps Russia’s reputation as a difficult place to travel to, and as a musician one is wary about bringing one’s best instrument for performance.

Despite all this, music is a deep and fundamental part of life in Russia. Audiences fill halls for concerts that last hours and enthusiastically clap in unison on the second curtain call. We worked for hours with students at the conservatoire, who were very well taught – sitting with the cello on the outside of the group, as most European groups (including the Calder Quartet) do. The way the Russian students had been taught to produce sound was different to our method in the US, and we spent a good amount of time working with students on sounding-point, tone density and how to vary soft colours without always going to the fingerboard. However, in each performance the expressivity and intensity was there. Each of the three student quartets we heard was on par with quartets from the American music schools we have visited. Student groups had multiple works they could play on command and their performances were both well thought out and well rehearsed. Their dedicated teachers were in the wings cheering them on. Despite limited funding, the conservatoire building is beautiful inside and out, and performing Bartók’s String Quartet no.6 in the conservatoire’s Glazunov Hall was a pleasure.

Russian audiences, while enthusiastic, have a different etiquette to American and British audiences. In our masterclasses and performances the audience would frequently continue talking after we had started playing. We joked among ourselves that now we truly understood why Haydn begins his quartets with signal chords, and thought about adding a few to the beginning of the Bartók no.6. That would have done the trick! During our masterclass, administrators entered and conversed loudly while the students were playing. In one way this is refreshing as it takes classical music off the Petri dish and is more akin to the way audiences behave at performances of other genres of music.

We had the chance to perform at St Petersburg’s Mikhailovsky Theatre, famous for its productions of Russian and European opera and ballet. The theatre is also used as an audition space for young ballet troupes. These young dancers were serious and excellent, and the 950-seat theatre is a beautiful space for them to dance in. In the director’s private rooms we performed works by American composers Philip Glass, Terry Riley, Andrew Norman and Ben Johnston and John Philip Sousa’s Stars and Stripes arranged by our friend Bruce Dukov. The Russians received these pieces with great enthusiasm. There has been some international tension between the US and Russia over Syria and Edward Snowden this autumn, and this had made it particularly difficult for us to get to Russia. When we received an ovation after performing one of our nation’s marches we really felt we had done our part in trying to bridge the gap of distance and understanding between our two countries.

Standing in line at St Petersburg’s Pulkovo Airport we saw a friend we had met on the flight over. A Russian professional living in London who holds dual citizenship, he returns to Russia often but lives and works in London. We talked about our visit and some of the highlights, but also of the difficulties getting to Russia. He understood but said that if we thought it was hard now, imagine what it was like ten years ago. He added that he hoped the next decade would see the country continue to open up and be more receptive to international artists. We certainly join him in that wish, for music holds a special place in this country’s heart.