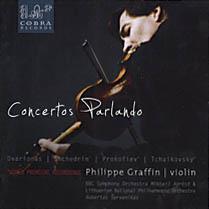 Twelve years ago the French violinist Philippe Graffin asked Rodion Shchedrin if he would compose a work for him in the vein of Shostakovich’s First Piano Concerto, retaining the trumpet but replacing the piano with the violin. The result is the three-movement Concerto parlando, here receiving its world premiere recording. It is highly dramatic in the outer movements, where a bright trumpet contrasts with the lyric violin. They surround an extended slow movement clothed in dark colours. The amount of inner detail from the orchestra speaks of much detailed preparation.

With such a profusion of highly regarded recordings of Tchaikovsky’s Violin Concerto already in the catalogue, Graffin at least makes his stand out by using Ysaÿe’s capricious first-movement cadenza. He is very free in his approach to rhythms and tempos throughout the work, with passages of technical brilliance sitting next to moments of uncommon poetic beauty. An extra rehearsal may have brought a more polished accompaniment from the Lithuanian orchestra, for it offers fine playing in Prokofiev’s Five Melodies, for which Shchedrin, at Graffin’s request, completed the orchestration begun by the composer.

Balys Dvarionas’s Pezzo elegiaco makes a pleasing curtain raiser to a well-recorded disc. The long break between the second and third movements of the Tchaikovsky, though, is surely an editing aberration.