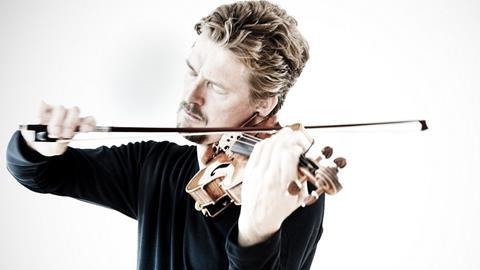 German violinist Christian Tetzlaff began playing the violin at the age of six.  He studied with Uwe-Martin Haiberg at the Musikhochschule Lübeck and later with Walter Levin at the University of Cincinnati. His breakthrough as a soloist came in 1988, at the age of 22, when he performed Schoenberg's Violin Concerto with the Cleveland Orchestra and the Munich Philharmonic. A highly individual performer, Tetzlaff delights in casting established works in a new light, championing forgotten repertoire and premiering new compositions. Giving approximately 100 concerts every year, he has served as Artist in Residence with the Berlin Philharmonic, joined over several seasons with New York’s Metropolitan Opera Orchestra, and appears regularly with the Vienna and New York Philharmonic Orchestras, the Concertgebouw Orchestra and London’s leading orchestras. Tetzlaff founded his own string quartet in 1994, in addition to a Grammy-nominated trio with his sister Tanja Tetzlaff and pianist Lars Vogt. He plays a violin made by the German violin maker Peter Greiner and teaches regularly at the Kronberg Academy.