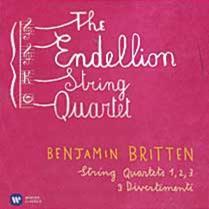 The all-British Endellion Quartet has long been a champion of Britten’s chamber repertoire, not least in its EMI recording of the string quartet works almost 30 years ago. This new release for EMI’s successor label pairs the three numbered quartets with the early Three Divertimenti. The group’s contact with Britten’s idiom is in many ways unassailable. Key to this, and clear to hear, are the blended tone of the playing, a fondness for darker colourings (especially well captured on the recording) and a responsiveness to a wide range of inventive and rapidly varying textures.

But one only needs turn to the Allegretto con slancio of the Quartet no.1 or the Burlesque of no.3 to sample the players’ agility and extroversion. They may not be as wildly unhinged as some quartets in the latter, but there’s never any doubt as to their own conviction.

The Andante calmo of no.1 is one of the most affecting one can expect to hear, with a real sense of communal breathing that allows a natural bloom and an expressive voice that lies halfway between desolation and consolation.

The Three Divertimenti, withdrawn by Britten after their first performance and later resuscitated, come across as much more than mere character pieces, though this element of their nature is also properly acknowledged.