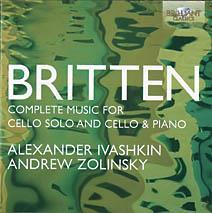 As a recording artist, Alexander Ivashkin, who died in January, will be best remembered for his series of Chandos discs in the 1990s: surveys of Russian repertoire ranging from Rachmaninoff and Prokofiev to Gubaidulina and his great specialism, Schnittke. This final recording, though, was of the solo cello and cello-and-piano works of Britten.
Sadly the quality of the recording is a let-down: the cello sounds recessed and, in the accompanied cello sonatas, the piano occasionally overpowers the cellist. But that doesn’t materially diminish Ivashkin’s evident feeling for these most inward and elliptical of Britten’s works. Playing on a 1710 instrument by Guarneri ‘filius Andreae’, Ivashkin never produces a tight sound and even if there are occasional imperfections in tuning, his expressive goals carry you along. He prefers darker sentiments over the whimsical. This leads to a little sagging in the Fuga of Suite no.1, but in the Lament (Suite no.1), Elegia (C major Sonata) and the Andante lento of Suite no.2 he strikes a remarkable balance, tempering heart-on-sleeve Russian-style dolorousness with a streak of English reserve.

There’s one work here not written for Rostropovich and receiving its premiere recording – an early cello-and-piano sonata, indebted to Schubert. It is unremarkable, other than for the fact Britten wrote it aged 13.