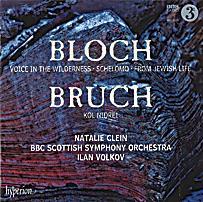 The restrained dignity and expressive intensity of Natalie Clein’s playing are effectively displayed in these works drawing on her Jewish heritage. She plunges deep into the world of Bloch’s Schelomo (Solomon), forming a red-hot line of communication with the listener in both its introspective, brooding moments and its soulful outbursts. The orchestra’s string section produces a flawless body of sound and the balance is nicely judged.
In From Jewish Life, effectively enhanced by Christopher Palmer’s arrangement with string orchestra and harp, it’s hard to imagine a more beautiful sound than that conjured up by Clein on her 1777 Guadagnini as the solo line rises up in ‘Prayer’, and weaves a mournful spell in ‘Jewish Song’.

Voice in the Wilderness is both more autumnal and more abstract. Volkov conjures a vivid palette of colours from the orchestra, which the recording equals in richness, and Clein plays her more reflective role with grace, finally breaking out into a deeply felt cadenza. In an emotionally charged performance of Bruch’s Kol nidrei, she pulls the rhythm around too much for my taste, shortening the up-beat quaver in the opening chant, and coming off early from the tied notes. However, the urgency of her interpretation is hard to resist and her high final phrase is breathtakingly beautiful.