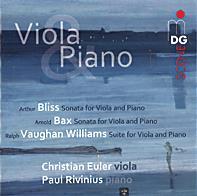 It is a good sign that the Lionel Tertis repertoire of English music from the early 20th century is being taken up on the other side of the Channel. This recording by German-born Christian Euler includes two of the best sonatas written for Tertis: Arnold Bax’s from 1922 and Arthur Bliss’s from 1933. In a relatively crowded field that includes recordings by Tertis with the composer, and by William Primrose with Harriet Cohen, Euler and Paul Rivinius more than hold their own in the Bax, aided by MDG’s stunning recording quality. Euler sticks to the notes as printed, without any of the changes made by the earlier players, and makes them work effectively – the central scherzo achieves an overwhelming momentum.

This well-filled CD is completed by Vaughan Williams’s Suite from 1934, seldom heard in its viola-and-piano guise. Euler’s playing in the eight short movements is utterly lovely, catching the innocent charm of the ‘Carol’ and ‘Christmas Dance’ while dispatching the Moto perpetuo with rare virtuosity.