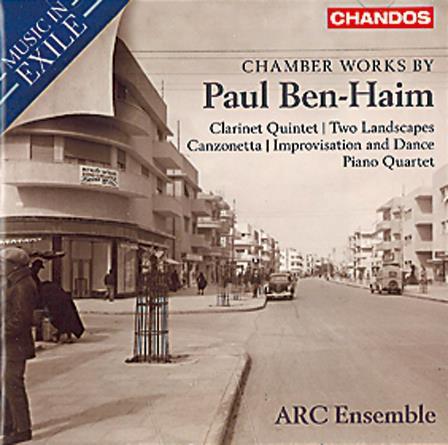 In concert and on disc, the ARC Ensemble of Toronto, formed by members of the Glenn Gould School of the Royal Conservatory, has made a feature of music composed in exile. The group’s first disc for Chandos focuses on Paul Ben-Haim (1897–1984), the Munich-born Jewish composer who, having been fired from his post as assistant conductor at Augsburg Opera, moved to Palestine, later taking Israeli citizenship.

The Piano Quartet is a youthful work, written at the age of 24, but it shows strong ambition. The ARC Ensemble clearly identifies with the passion and scale of the opening movement and brings an intimate atmosphere to the song-like slow movement. In the finale, the players judiciously balance the jaunty folk-like element – a hornpipe according to Simon Wynberg, the group’s artistic director, in his booklet notes – with the movement’s denser textures.

The Improvisation and Dance – composed in 1939, six years after the composer’s move to Palestine – draws nimble-fingered playing from both violin and piano, while the first of the Two Landscapes for violin and piano comprises a colourful Hebraic recitative. The Levantine influences are less overt in the Clarinet Quintet, but are always handled with flair, and with care. The recording is finely balanced, matching these committed and illuminating performances.