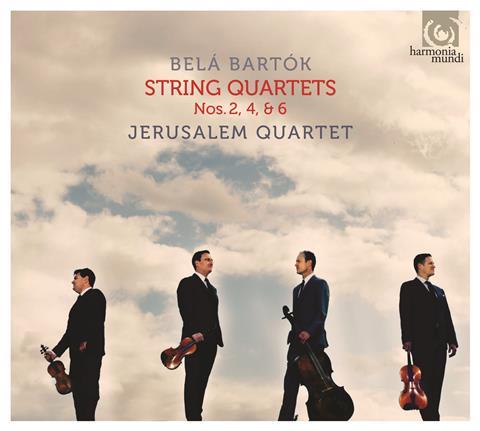 The Jerusalem players open Bartók’s Second Quartet with a passionate account of the first movement, knitting its disparate elements into a satisfying whole, imbued with warmth and featuring some beautiful high keening from cellist Kyril Zlotnikov. The snarling, raucous second movement is shocking in its pagan intensity, and the mystery of the slowly unfolding finale is heightened by exemplary attention to Bartók’s markings. The first movement of the Fourth Quartet snaps away splendidly, with some wonderful muscular glissandos. The cellist shows his mettle again with a robust recitative at the opening of the third movement, with beautifully spectral playing from the other players to follow. The pizzicato fourth movement is full-bodied, perhaps a little too much so when Bartók asks for quiet. In the finale the players are too wise and musical to treat every fortissimo as an attack (as some do), and there is beauty and sophistication to match the energy.

In the Sixth Quartet the playing is clear and limpid in the first movement; the Marcia and Burletta are by turns rhythmically crisp and low-down louche. The plaintive last movement is simply done and affecting. These are fine performances, shot through with beauty. The recording is close-miked and resonant.