Bach's humanity has provided comfort in a turbulent year 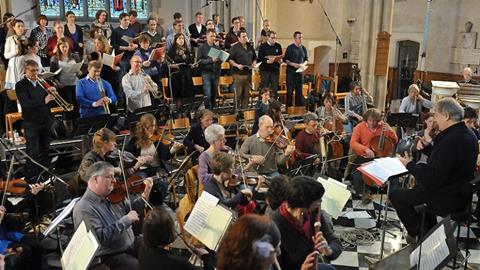 The Monteverdi Choir and English Baroque Soloists were fortunate enough to spend the year 2000 immersed in the music of Johann Sebastian Bach's church cantatas, performing all of them in over 60 concerts under Sir John Eliot Gardiner. We re-visited many of those cantatas with him during the interim decade and a half. Then a couple of years ago news came about a possible St Matthew Passion touring and recording project in 2016. Having first recorded this pivotal work in 1989, John Eliot has performed it a great number of times over the years. However, this time was different, a gargantuan endeavour of 16 performances spanning the whole year. What an undertaking it has proved to be!

There is always a new slant on works John Eliot re-visits. This time the most obvious and dramatic one was the choir giving up their scores, and singing the whole Passion without music in hand. The Monteverdi Choir has never done anything like this before, certainly not for a three hour-long work containing 15 chorales and 25 choruses. We, the players, could only imagine how daunting it must be to remember the alto or tenor line of the fourth harmonisation of the Passion Chorale. It proved to be an awe-inspiring decision, enabling the choir to look the audience straight in the eye, have a real dialogue with one another in the split double-choir movements, turn into a menacing crowd in the 'turbae', and be involved in every moment, singing or listening, in an uncannily intense way. In the course of the performances they became more and more akin to the Greek chorus of an ancient drama, both witnesses and perpetrators in a story hurtling towards its inevitably tragic conclusion night after night.

In his book 'Music in the Castle of Heaven'' John Eliot asserted that the story at the heart of the St Matthew Passion 'has a resonance for beleaguered humanity at all times and in all places – from instances of false accusation in private or domestic life to the outrages under regimes of torture. [...] It would be hard to better it as an essentially  human drama of immense struggle, betrayal and forgiveness, love and sacrifice, compassion and pity.'

This came forcefully into focus when tragedy struck on our first leg of the tour. Having just played in Spain to audiences intimately familiar with the music and listening in silence thick with understanding, news came of the Brussels terrorist attacks as we were on our way to the Concertgebow in Amsterdam. Next day's concert was supposed to take place at the Palais des Beaux Arts in Brussels, and chaos reigned as to possibilities of travel and the safety of the venue. We ended up travelling to Brussels in a whirl of conflicting emotions to have one of the most memorable performances of the tour, streamed live in a last-minute arrangement. The public, who had undergone long and stringent security checks at the doors, filled the hall to the brim. Their listening seemed heavy with shock, bewilderment and defiance in the face of shattered normality. They palpably sought comfort in music and in Bach's humanity. It was deeply humbling to sing and play to them.

The next leg of our tour took us to Germany, where audiences know and live every word of the work, so the challenge was to deliver something unique. In one of the venues, the beautiful Romanesque Kaiserdom in Königslutter, we had an unusual spacial constraint: the marble effigies of two medieval knights on their highly ornate coffins reside for centuries in the middle of what was to be used as the performance space. John Eliot used this to our advantage, and the performance platform was built around them. We performed 'in the round', choir and orchestra facing one another and the public surrounding us all, resulting in unexpected intimacy and complicity between singers and instrumentalist in that otherwise cavernous space. Another highlight was performing in Bach's very own Thomaskirche in Leipzig, up in the gallery, hidden from view of the audience whom we could only feel but not see. What we could see however, was Bach's resting place at the opposite end of the church, which we all faced as we sang and played…

John Eliot's renewed approach included having soloists for all the arias stepping out from the choir, with several singers 'sharing' the same aria. Anchored by either Mark Padmore or James Gilchrist, the two incomparable Evangelists who shared the harrowing narration of the Passion story over the year, no two performances were the same, as each of the choir singers brought their own qualities to the arias. And what a wonderful challenge this was to us obbligato instrumentalists, positioned in each aria in close proximity with the singer and also playing without music. We could change and adapt our take on 'our' arias to various singers, and never cease to experiment, explore and grow.

Then, about to finish our Passion journey, tragedy struck again much closer to home. We lost our beloved long-standing stage manager, Richard Fitzgerald, to lung cancer detected only a few months previously. His funeral took place three weeks before the last of our Passions. He was in the forefront of our minds as we assembled in the magnificent Duomo in Pisa to perform for the last time. This was to be recorded live, adding the extra challenge of trying to sum up in one evening all we have understood about the piece throughout the year. What makes a concert stand out? Was it the sense of occasion? The beauty of the venue? The unfolding of the drama steered by a visibly overcome John Eliot? In any case - the result was three hours of music making as near to perfection as we have ever witnessed.

And now we are about to close this turbulent year with some more Bach - this time music full of hope, with the trumpets and horns of resurrection blasting away. We are about to embark on a pre-Christmas tour performing the Magnificat and the Lutheran Mass in F major, two life-enhancing works in complete contrast with the all-too-human tragedy of the Passion. Hard to imagine a more fitting way to end another extraordinary year with Bach.

From 2 to 12 December, the Monteverdi Choir and English Baroque Soloists will tour Bach’s Magnificat with the Lutheran Mass in F Major and Cantata Suesser Trost to Frankfurt, Groningen, Berlin, Munich, Innsbruck, Vienna, Versailles, finishing at the Barbican in London on 12 December. For details visit www.monteverdi.co.uk.