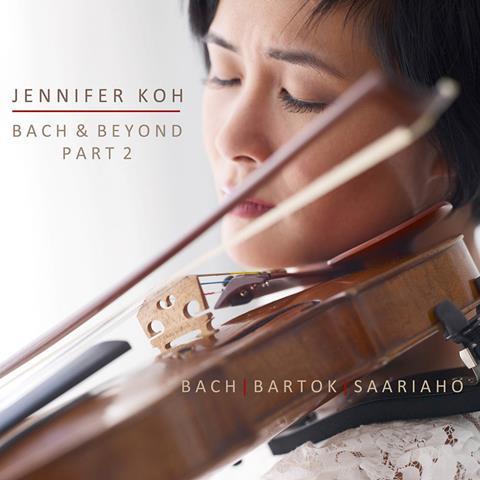 There’s a feeling of power in reserve about Jennifer Koh’s playing, which is never louder than lovely, and underneath the sleekly sustained lines and discreetly tapered phrase-ends is the violinistic equivalent of a V8 engine purring away. She makes good sense of the fugues in both Bartók’s Solo Sonata and Bach’s G minor without digging into the counterpoint. Bartók’s long and difficult third-movement Melodia never sags once, thanks to her close attention to tone colour; however, she could have been more adventurous in the Bach, which is never less than well bred, but a little dirt under the fingernails of, say, the final Presto would not have gone amiss.

Frises (Curls) was originally commissioned as a companion piece to emerge from Bach’s D minor Partita but is here paired with the B minor. Koh made this authoritative recording a few months after giving the US premiere in February last year. The live electronics, triggered both by the soloist with a pedal and by an assistant at a mixing desk, are discreetly balanced – it might be easier to hear the atmospheric detail in concert – and Saariaho’s writing for the violin veers between generically busy and rhapsodic. Koh makes a strong case for the piece as worthy of comparison with a work of the stature of Boulez’s Anthèmes II.