Even the grim January weather could do little to dampen enthusiasm as 21 top ensembles gathered for a series of concerts and masterclasses, writes Tim Homfray 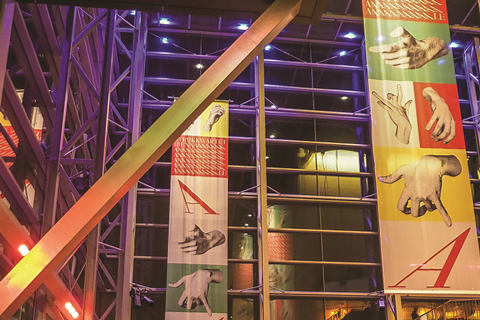 Biennale banners at the Muziekgebouw

There is a fine view across Amsterdam’s River IJ from the Muziekgebouw, the splendid award-winning concert hall set within what feels like a giant glass box. It is best in the sun, I am sure, rather than the gloom and rain of late January – but the first String Quartet Biennale was scheduled for this time of year, so there I was with my coat and umbrella close to hand.

There was plenty here to sate even the most ardent quartet-o-phile: a week (27 January – 3 February) packed from morning to night with concerts. Each day began with Early Haydn – one op.20 quartet at 9.30am – and ended with Late Beethoven at 10.30pm. The list of ensembles taking part was impressive: Emerson, Casals, Doric, Hagen, Signum and Cremona were part of the line-up. There were also many supplementary events, not all limited to the string quartet fraternity. Pianist Alfred Brendel gave a talk; so did Alex Ross, writer of The Rest Is Noise. The Beethoven specialist Barry Cooper spoke on the late quartets.

There were five main concert strands on most days, and I sampled one of each in the short time I was there. So at 5pm on 30 January I settled down amid a sizeable audience to hear the Emerson Quartet performing Ives, Barber and Schumann. In Ives’s First Quartet ‘From the Salvation Army’ the playing was robust and colourful, with a hearty muscularity which suited the subtitle. The players seemed to enjoy the hanging ending of the second-movement Allegro, which sounds as if Ives ran out of paper and simply stopped. Barber’s Molto adagio from his op.11 Quartet (yes, that Adagio – a shame they didn’t play the whole work) was intense and intimate, for all its wiry strength. Schumann’s A major Quartet op.41 no.3 pulsed with nervy energy, the colours at times bold and primary, at others diffuse and flickering. It was a tremendous performance, which earned them a standing ovation, as did the seventh of Dvořák’s Cypresses, which they gave as an encore. 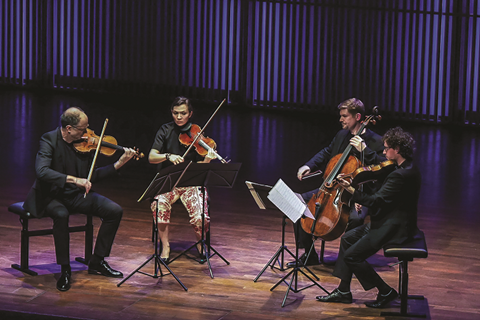 The Signum Quartet: graceful and featherlight in Beethoven

At the time, I thought that the standing ovation showed a particular appreciation, but the audiences at every concert I attended were similarly enthusiastic. One of the many people who ferried me from the hall to the hotel I shared with the artists wondered if the practice devalued ovations. But the enjoyment was genuine, so why not stand up? I bet the artists appreciate it.

The main hall of the Muziekgebouw has beautiful acoustics. There is both clarity and warmth, so one can hear each player in forensic detail while the ensemble sound glows. It is rectangular and unadorned, but attractive, with walls like vertical venetian blinds lit from behind in various colours.

The wonderful building itself has three levels, each with its own balcony jutting out. On every level there are spaces in immediate sight or hidden around corners, and during the festival each of these areas had its own delights. Next to the restaurant there was a stall selling second-hand sets of string quartet sheet-music parts. Upstairs, next to a stand full of coffee and cakes, there were bow and instrument makers showing what they make and how they make it. Someone else was selling hand-made cases for storing vinyl LPs. On the ground floor was a platform where student quartets played while audiences enjoyed a glass of wine between one concert and the next. There I caught the end of a rather good performance of Ravel.

At the end of my first day I heard the Signum Quartet play Beethoven’s A minor Quartet op.132. It was a graceful performance, often with a featherlight touch. The great slow movement was profound – a single multifaceted paragraph of tremendous cumulative power. Intonation was not always perfect, but this was of little concern considering the quality of the music making. The hall was not full this time, but then again it was late at night; there was another standing ovation. The quartets also gave masterclasses. Philip Setzer, co-leader of the Emerson Quartet, worked with players from two student quartets on Webern’s Six Bagatelles op.9. For this we were in the Atrium Hall, which has my only complaint. It would be easy to set up a platform, but instead the players were at the same level as the audience, with those of us near the back peering around heads and consigned to watching bow tips popping up and down.

Setzer worked through the bagatelles bar by bar – but how else in these tiny works? They are very gestural pieces, he said; think of them like tiny poems or Kandinsky paintings. He talked of machine-like phrases which connect the bagatelles, of composite rhythms running among several instruments, and of hours the Emerson players spent getting the triplets right in the second bar of the second bagatelle. He pointed out the impossible pizzicato crescendo marking at the opening of the fifth: ‘Maybe just do it with your body, so it feels like a crescendo.’ All of the works should be played with feeling: the effects, such as ponticello, are not abstract sounds. 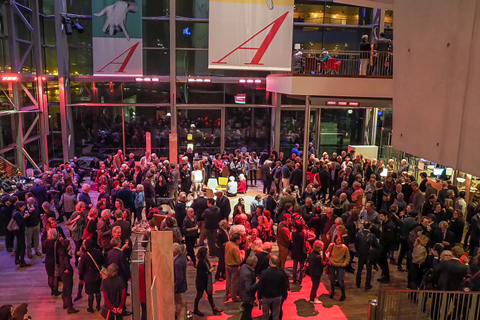 Interval crowds at the Muziekgebouw

At 8.15pm the Emerson Quartet performed the Six Bagatelles, and after the masterclass one could appreciate the concentration and craft that went into the playing. This was a string quartet as one instrument and it barely seemed the same music that we had heard in the afternoon. Before the Webern came Bartók’s Third Quartet, full of rhythmic vigour. At the end was Schubert’s String Quintet with cellist Gary Hoffman – a performance that was never hurried, often timeless but which always had a sure narrative thread.

The following morning I heard the Early Haydn concert: op.20 no.4 in D major, played by the Signum Quartet, which the players obviously enjoyed; they reflected the syncopations of the gypsy third movement physically as well as musically, and were high-spirited in the final Presto. At the end of the concert they gave the Dutch premiere of Mokale Koapeng’s Komeng, written in 2003 – a gentle five-minute piece drawing on the percussive ostinatos of his native South Africa. It was one of many contemporary works featured in the festival.

Finally, for me, was a masterclass given on the same day by the Doric Quartet on how to approach a first rehearsal. They started with a beautiful performance of the opening of Beethoven’s Grosse Fuge, after which they played as if they had never seen it before and were all just obeying Beethoven’s constantly reiterated forte and sforzando markings. (Sad to say the aggressive mess sounded like some actual performances I have heard.) They then slowed it down, following the phrase shapes and trying different bowings – and, as with Webern’s pieces the day before, the transformation from ‘first attempts’ to finished performance was, I suspect, akin to cleaning an old painting and discovering a masterpiece.