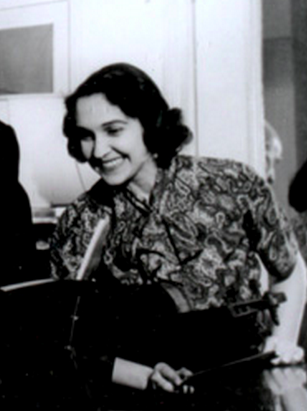 Armenian-American violinist Anahid Ajemian died on 13 June at the age of 92. A founding member of the Composers String Quartet, the New York-born musician was an active solo and recording artist, and a champion of new music. She also performed frequently with her sister, the pianist Maro Ajemian.

Anahid Ajemian studied at the Institute of Musical Art and later at the Juilliard Graduate School. She won the Walter W Naumburg Foundation competition in 1946 while still a student of Juilliard professor Edouard Dethier.

She teamed with violinist Matthew Raimondi, violist Bernard Zaslav and cellist Seymour Barab to establish the Composers String Quartet, dedicated to performing contemporary works by young and established composers, in the mid-1960s. The ensemble, which continued performing internationally until the 1990s, was in residence at the New England Conservatory and later at Columbia University, where Ajemian was a longtime faculty member.

The violinist also launched the Friends of Armenian Music Committee in New York in the 1940s, and Music for Moderns, a contemporary concert series at the city’s Town Hall, with her record producer husband George Avakin in 1957.