In the third part of his blog series for The Strad celebrating Thomastik-Infeld’s 100th anniversary, Franz Klanner, the Austrian string manufacturer’s director of engineering and technology, concentrates on whistling and other common issues of violin E-strings 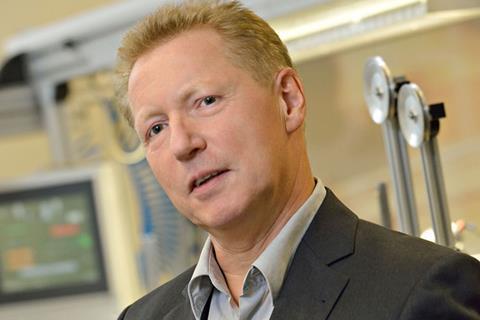 Franz Klanner, director of engineering and technology for Thomastik-Infeld

WHAT ARE THE TYPES OF E-STRINGS?

In principle, there are two types of E-strings: wound and unwound.

The wire materials for unwound E-strings are either chromium-nickel steel or carbon steel.

E-strings with a core of carbon steel have an exterior tin coating. To avoid corrosion, Thomastik-Infeld normally incorporates one or more protective metal layers as well. These strings are known as multi-layer strings.

Chromium-nickel steel is also often known as chromium steel, non-corroding steel or simply stainless steel. Although chromium-nickel steel contains nickel and chrome, among other substances, this material triggers virtually no allergies. Chromium steel strings are extremely resistant to corrosion, so can also be used without any coating.

If they are still coated to define tone or handling properties, gold, platinum, titanium and molybdenum are used as the external material. Coatings made of palladium and rhodium are also possible. These surface materials are very often used for jewelry.

Different materials have different effects on the tone and whistling of the E-string. The following graphic shows which E-strings are characterized by a brilliant, clear tone, which whistle less or also sound darker and more focused: 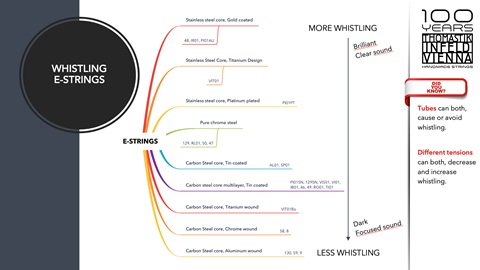 Whistling E-strings are a well-known and frequent problem. The material of the string itself has a major influence on the whistling of the E-string, but the player’s bow technique and the condition of the rosin and bow hair can also play a significant role. In addition, an E-string’s tendency to whistle depends heavily on the individual instrument. 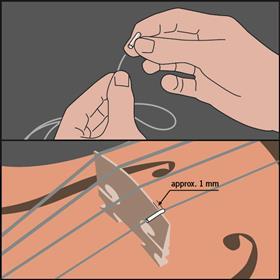 To reduce a whistling E-string, we recommend mixing violin and viola rosin together as a first step, as viola rosin is firmer and this combination allows a better bow response. Two strokes each of viola and violin rosin can really reduce the whistling.

The sleeve on the E-string can also make the string sound warmer, as well as minimizing or increasing the whistling. For this reason, we recommend trying both options. Thomastik-Infeld includes a small envelope with this sleeve on many E-strings.

The string tension also has a massive influence on E-string whistling. If you play an E-string of average tension, we advise that you use a string of the same string type with less tension. If the whistling increases as a result, you should try a higher string tension.

Of all the types of strings, gold-coated strings have a particular tendency to whistle with their pronounced brilliance. The platinum-plated E-string PI01PT, which is available in the Peter Infeld Set PI100, is a good compromise between tin coated and gold coated E-strings, as it whistles less in comparison with the gold coated strings but has a similar response. We also recommend this string for soloists who play in large halls and for weaker instruments, as it has a high brilliance with the maximum tonal strength and warmth.

In some cases, E-strings can lose their fifth purity. The cause of fifth impurity is when the mass is not spread uniformly over the length of the string. Thus, when playing, the tin layer wears out unevenly due to wear and tear on the fingerboard and the string can become coarse on the surface. However, this can also happen as a result of sweaty hands.

Multi-layer E-strings, for example the Peter Infeld PI01SN E-string (in Set PI101) or the Vision E-string VI01 (in Set VI100) have a thinner tin layer, making them less prone to becoming impure on the fifth. They are also more resistant to corrosion. The surface of these strings still becomes rough in the short term due to sweaty hands, but, by playing continually over a number of days, this normally becomes smooth again without suffering any loss of quality.

RATTLING OF THE E-STRING

A further phenomenon of E-strings is rattling. This is caused by an uneven distribution of the inner tensions of a string. The rattling mainly affects chromium steel strings, but also tin-coated E-strings. If an E-string begins to rattle, we recommend replacing the strings.

EXCESSIVE BREAKING OF THE E-STRING

Sometimes, E-strings break off at the loop end, the bridge or the peg. This is due to the fine tuner hook becoming sharp-edged over time. A luthier can help here, using his or her expertise to round off the fine tune hook.

Another option for preventing the breaking of E-strings is to move a sleeve over the fine tuner hook. However, the pitch stability can suffer here. Should this be unsuccessful, we recommend using E-strings with a ball-end.

Thomastik-Infeld includes a small envelope with this sleeve on many E-strings, which can be pressed into the loop, if necessary. If the string breaks off increasingly at the bridge or pegs, we recommend that you get the grooves checked by a luthier. Adding a lot of graphite to the groove also has a positive effect.