The structure and shape of strings make them difficult and costly to recycle. But that hasn’t stopped some manufacturers from tackling the challenge, and even extracting metal from old strings to use in new ones, writes Tom Stewart

Like the infamously difficult-to-recycle disposable coffee cup, strings are composite items, and their wiry, flexible form makes it tricky to process them in traditional machinery. Far removed from their humble origins as single pieces of animal gut, modern strings usually contain one or more different metals, often surrounding a core made of steel, gut, or more frequently a synthetic material. Take, for example, the E string of Thomastik Infeld’s Peter Infeld violin strings. Players can choose between a tin-plated carbon steel core and a stainless steel core with either gold or platinum plating.

Or how about D’Addario’s Helicore cello strings, which feature a multi-stranded steel core wound, depending on the pitch of the string, in titanium or a combination of tungsten and silver. ‘All these metals are easily recyclable individually,’ says D’Addario’s Brian Vance. ‘When you have to smelt them down together, though, it very quickly stops making financial sense to separate them back out again into their component parts. It’s good for the environment but it doesn’t tend to make you any money.’

Another limiting factor, as Alex Payne of US recycling firm TerraCycle explains, is the strings’ shape. ‘They’re long, thin and bendy, so they routinely tie up the shredders that are usually employed to process materials for recycling,’ he says. ‘To avoid having to build different shredders, we compress the strings before we prepare them for smelting.’

Perhaps unsurprisingly, the majority of string makers I contacted suggested that recycling strings was an environmental red herring. Due to the transportation required to move strings between them, the consumer and the factory, these manufacturers say any environmental benefits would be lost. In other words, they do not recycle strings because of their commitment to sustainability.

‘Returning the strings to us in Denmark would require scrap metal to be shipped around the world, which isn’t something we support,’ says Ole Wichmann of Larsen Strings. ‘When customers ask us about this, we recommend they use whatever recycling solutions are available to them locally.’ For-Tune Strings, based in Beijing, has also considered the merits of recycling used strings, but decided against it on environmental and technological grounds. ‘From our point of view, the benefits of string recycling do not account for the energy required to ship the strings back to the manufacturer,’ says For-Tune’s research and development manager Curdin Coray.

‘Being long, thin and bendy, strings routinely tie up the shredders that are usually employed to process materials for recycling’– Alex Payne, terracycle 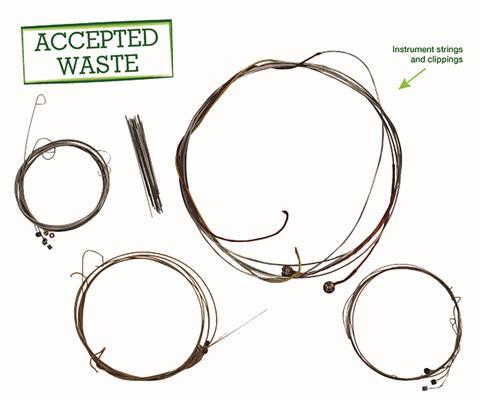 On the other hand, D’Addario launched a recycling programme with TerraCycle in 2016 called Playback. Although the scheme is only available to customers in the US, it has already recycled more than six million strings. TerraCycle, which describes itself as ‘the global leader in collecting and repurposing hard-to-recycle waste’, processes complex items like Pringles tubes and contact lens packaging, often working in partnership with producers to offer consumers a way to recycle items that municipal services are unable to accept.

‘Playback allows customers to send us any strings produced by any manufacturer,’ says Vance. ‘Then we pass them on to TerraCycle for processing. The whole thing is funded entirely by us.’ It should be clear by this point that recycling a string is an expensive business, so why do it? I put Coray’s point about energy use to Payne, who responds that recycling always prevents an item from ending up as waste. And, he says, since ‘more than 90 per cent’ of the energy used in manufacturing is expended processing raw materials, recycling is almost always a means of reducing energy consumption.

Although D’Addario and TerraCycle accept all strings made from metal or synthetics for recycling, the majority of those they receive are guitar strings, a large proportion of which are 100 per cent nylon. ‘After the strings with metal components have been removed, the nylon ones are melted down and turned into pellets for a range of industrial plastic applications, like manufacturing the fleecy material used to line the ceiling of a car,’ Payne explains.

All strings, regardless of their composition, have to be compacted before they are melted in an extruder, a stage of the process for which TerraCycle had to design and implement an additional piece of machinery. As Vance pointed out, separating out the numerous metals from which strings are constructed, while technically possible, is economically unsustainable. Instead, TerraCycle uses the molten alloys to create ingots that can be sold to manufacturers of new products, like car wheel rims, that require similar chemical compositions. Synthetic cores at the centre of many strings cannot be separated from their metal surroundings, but are simply vaporised as a result of the extreme temperatures required.

Larsen’s and For-Tune’s concerns about transportation appear to be shared by D’Addario, but there are ways, they say, to keep financial and environmental costs down. ‘Once players have collected at least two pounds’ worth of used strings, they can download a pre-paid postage label from the website and use it to send the strings to us,’ says Vance. ‘Having them send the strings in bulk reduces the cost and the carbon footprint of the operation. We encourage people to send not just their own strings, but those of their friends, school and orchestra, too.’ Anyone who finds this impractical can deposit their strings in special bins at hundreds of locations across the US. ‘There’s a Playback bin at every branch of Music & Arts, and hundreds more at independent retailers and instrument makers,’ Vance explains. 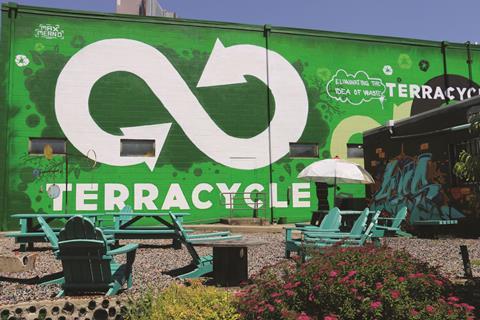 These numbers make clear the scale of D’Addario’s operation, which would clearly be beyond the means of most string makers, many of which – in Europe at least – are still run as smaller-scale family businesses. D’Addario, on the other hand, is the world’s largest manufacturer of strings for musical instruments, and produces tens of millions of them each year. In other words, they may be able to take a significant financial hit in exchange for the marketing boost that this kind of corporate social responsibility is likely to generate, while the same cannot necessarily be said of small businesses. The question remains, too, why another firm would take on the burden when D’Addario’s scheme covers strings sold by all manufacturers.

Separating out the numerous metals from which strings are constructed, while technically possible, is economically unsustainable

According to BDSV, an industry body for German steel recycling firms, around a quarter of the steel produced worldwide between 2014 and 2018 was recycled from scrap; the rates for certain other metals, such as aluminium, are even higher. If the wholesale recycling of instrument strings poses too great a challenge (or is taken care of elsewhere), can manufacturers improve the environmental impact of their operations by using recycled materials in their products? Coray is sceptical: ‘Using recycled materials affects the final product and turns string making into an even more difficult and challenging science,’ he says.

As the complexity of the alloys and physical constructions used by string manufacturers shows, advances in the industry often come down to highly engineered combinations of very specific materials. String manufacturers appeal to players by claiming that their strings offer desirable qualities like improved response time, an expanded spectrum of tonal colours or the ability to help the quietest note carry to the back of the concert hall. To separate their products from the rest, they spend considerable time and resources testing different proportions of metals in the alloys they use for the cores, coatings and windings. Using recycled materials would undermine these processes and disrupt the uniformity of the finished product.

Or would it? Coray and Wichmann explain that, although For-Tune and Larsen do not recycle used strings, they do melt down and reuse scrap metals generated by their manufacturing processes, demonstrating that recycled metals do have a place in string making after all. Slovakian maker Warchal goes one step further, inviting players to return their used Warchal strings so that the silver component can be extracted and used again in the manufacture of new strings.

‘Our scheme is different from D’Addario’s because we use the recycled metals ourselves,’ explains Klaudia Warchal. ‘Not only that,’ she says, ‘but we actually use the silver we collect to make new strings. The process we use to remove the silver doesn’t upset its atomic structure in a way that affects its quality, so we can use it without adjusting our usual “recipe”.’ Although only the silver components are currently redeployed, the company is also building up stocks of other metals recovered from their strings, and hopes one day to use these, too.

The ‘Warchal Goes Green’ initiative began in 2012, providing players with credit to spend on new strings in return for their old ones. After seven years of collecting and processing the metals, in 2019 the company launched its Phoenix violin strings – the first commercially available set to include metal recycled from strings that have already been played. ‘I don’t want to sound mystical,’ says Klaudia Warchal, ‘but because the silver has already vibrated with great music in concert halls around the world, we think it adds special value to the strings.’ Although they are a little more expensive than most of the manufacturer’s other products, Warchal says the Phoenix set are currently its best-sounding violin strings. And, unlike D’Addario’s Playback programme, Warchal’s scheme is open to players all over the world – as long as they play Warchal strings.

‘Because the silver has already vibrated with great music in concert halls around the world, we think it adds special value to the Phoenix strings’ – Klaudia Warchal

Amid the ever greater acceptance of the need to recycle more of what we use, it’s clear that some string manufacturers are finding a role for themselves as advocates for recycling and pioneers of new uses of recycled materials. D’Addario has shown that, with enough investment, the complex, composite nature of an instrument string doesn’t mean it can’t be recycled in its entirety into new products, albeit unrelated ones. And although Warchal doesn’t yet have the ability to reuse all the component materials of its strings in its own manufacturing process, its use of recycled silver in new strings is an exciting development.

It’s clear, however, that not everyone thinks that recycling offers a sustainable way forward, though such views often seem to be based on doubts over recycling’s economic viability. The success of Warchal’s and D’Addario’s initiatives have shown, though, that environmentally engaged players are keen to help manufacturers conserve energy and materials, while technologies like those developed by TerraCycle may one day pave the way for more string manufacturers to explore how recycling could benefit them, their customers, and the environment.