How to use bow pressure to produce a fine, even tone, to vary texture and dynamics and to produce smooth bow changes from The Strad archive 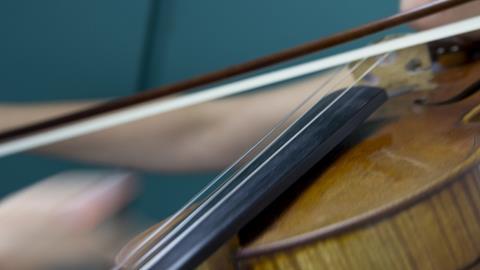 A constant bow speed facilitates smooth connection of bow strokes; that also enables a constant bow pressure and contact point, ensuring continuity of dynamics and tone colour. For a warm sound, the slow bow stroke is also relatively close to the bridge and deep into the string, while a cool sound finds the fast bow stroke further from the bridge and more on the surface of the string. The same goes for opaque (close, deep) and transparent (further, lighter).

Some violinists have a very bad habit of starting the stroke by biting it out with great pressure. Now this is altogether wrong, as the tone is at once killed. The student must remember that the pressure from the bow on the string, even when an incisive attack is required, should never be more than is absolutely necessary to set the string in instant vibration.

The only place at which we can produce a clear sonorous tone, without any damping effect, is in the lower third of the string – say midway between fingerboard and bridge. By applying an even pressure at the same point of the string we shall experience no difficulty in producing a sound and full tone of satisfactory character. As the vibrations of the string decrease in amplitude towards the points on which the string is anchored – in this case towards the bridge – we shall find that by moving the bow towards the bridge we may safely increase the pressure on the string, because here we do not interfere with its vibrations, but on the contrary meet with greater resistance to the pressure of the bow. A fortissimo tone, therefore, can only be produced near the bridge.

In tone production, the most important factors always to consider are the speed of the bow, the amount of bow pressure used and the bow’s distance from the bridge. As the speed of the bow increases more pressure is needed to keep contact with the string. And the nearer the bridge, the harder the tension of the string, so again more pressure is needed. Therefore, using a lot of bow near the bridge requires a great amount of pressure.