The young violinist receives a $20,000 cash award and performance and broadcasting opportunities 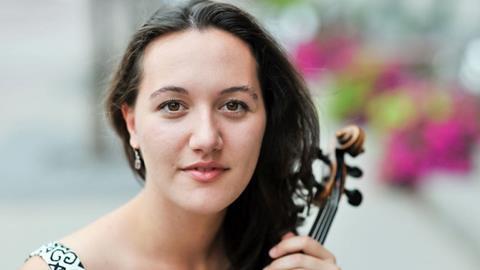 Yolanda Bruno has won First Prize and the Audience Choice Prize at the inaugural Isabel Overton Bader Canadian Violin Competition in Ontario. The 27-year-old violinist receives a $20,000 cash award, a performance with the Kingston Symphony, and a recital to be recorded by CBC Radio 2 for national Canadian broadcast.

Second Prize, worth $4,000, goes to Katya Poplyansky, currently a student at the Glenn Gould School in Toronto, while third prize, worth $2,000, is awarded to Lucy Wang, who is currently studying at the Colburn School in Los Angeles.

Bruno, who played Bartók's Second Violin Concerto in the competition's final round, performs on the 1700 'Taft' Stradivari on loan from the Canada Council for the Arts Musical Instrument Bank. She is a graduate of McGill University’s Schulich School of Music in Montreal and the Guildhall School of Music and Drama in London, where she studied with David Takeno.