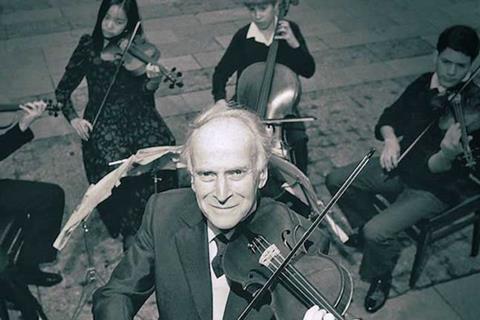 Yehudi Menuhin is widely regarded as one of the leading violin virtuosos of the twentieth century. Born into a Belarussian-Jewish family in New York, Menuhin studied in Paris under the Romanian violinst Georges Enesco, with whom he developed a life-long relationship. He began touring as a teenager and quickly won plaudits for his highly interpretive style. Influenced by his background and family, Menuhin became a spokesperson for human rights, playing a series of concerts in Germany for survivors of the Bergen-Belsen concentration camp. Throughout his career, Menuhin was dedicated to airing new music during his concerts and in particular the works of Béla Bartók. He was also open to influence from alternative styles and collaborated with the renowned jazz violinist Stephane Grappelli, as well as the sitar star Ravi Shankar. Having spent most of his performance career in Britain, Menuhin opened the Yehudi Menuhin School for musically gifted children in Surrey in 1963. In 1965 Menuhin was granted a knighthood and retired from playing but continued his association with music as a conductor.