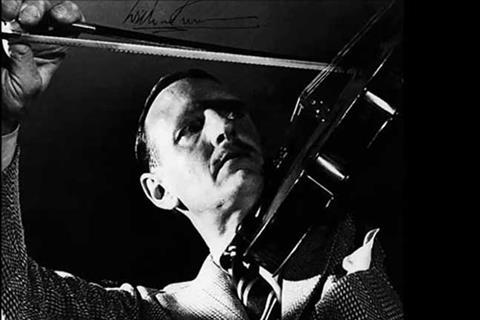 Born in Glasgow into a musical household, William Primrose began lessons on the violin at the age of 4 before moving with his family to London where he studied at the Guildhall School of Music and made his debut as a solo violinist at the Queen's Hall, in June 1923. Primrose then traveled to Brussels to further his musical education with Eugene Ysaÿe, where he also developed a strong friendship with Nathan Milstein. Due to the size and shape of his hands, Ysaÿe encouraged William to take up the viola, a move that he quickly embraced. The transition was confirmed in 1930 when Primrose moved back to London to join the acclaimed London String Quartet. When the quartet was disbanded in 1935, Primrose began performing across America and Europe, frequently featuring with the NBC Symphony Orchestra as a soloist before forming the Primrose Quartet in 1939. For the first part of his career, Primrose played an Amati viola before selling it in 1951 and purchasing the 1697 ex-Lord Harrington Guarneri viola, now known as the ex-Primrose.