Violinist Nigel Kennedy on Bach, Hendrix, and why he thinks music students should skip college 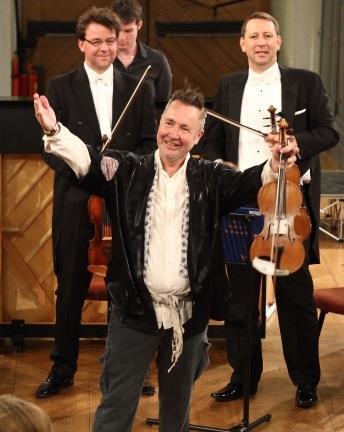 Yesterday evening I found myself watching a rehearsal in north London for concerts to be given by Nigel Kennedy and the Oxford Philomusica in London and Nottingham over the next three days. I spent my first few minutes in St. Jude’s Church, near Hampstead Heath, sitting on a schoolroom-style wooden chair, gazing around at the 20th-century arching redbrick walls and stunning ceiling murals all around me – but I was soon brought back to my senses. ‘Like f***ing that,’ said Kennedy gently to the orchestra, following up with some improvisation on his E string. Electric guitarists strummed away to a shuffling hi-hat, padded by rich, jazzy chords from the strings. A relaxed, hypnotic blend of music and sound-engineer chatter echoed all around.

I was not sure what to expect when I met him afterwards to talk about his upcoming performances. But he was a perfect gentleman – at least, he bent down to kiss my hand in greeting, and held every door – and he only swore a few times per sentence.

This is the third project that Kennedy, originally from Oxford, has worked on with the Oxford Philomusica – an orchestra that he feels has added a degree of professional musicianship to the city that was sorely missing before. The programme features everything from Bach’s A minor Violin Concerto to several pieces written by Kennedy himself and some Jimi Hendrix. ‘The players are used to reacting to different styles of music and playing musically without much rehearsal,’ says Kennedy. ‘Maybe this is more diverse than what some people would normally encounter, but I never like it when someone plays three Brahms sonatas in a concert, or Beethoven sonatas all week. It’s dreadful. You need some variety!’

By beginning with Bach, he hopes to collect his audience and musicians together by giving them a familiar starting point, before moving into less-charted territories. ‘Bach is something I play at home every day,’ he says. ‘It’s my way to wake up, to get into my playing. The structure is phenomenal and it makes you think about music; it helps you to open your mind. It’s like a form of meditation. All the musicians know Bach, so it’s a good meeting place to start the journey from.’

After his own acoustic, folk- and classical-inspired compositions, he finishes his concert programme with Hendrix because he admires the open nature of the music: it contains elements of rock, jazz and folk, and interpretation is flexible. ‘Hendrix stands out above other composers because he gives you a much broader canvas to work with,’ he says. He is adamant that his musicians should not try to emulate Hendrix the musician in any way: ‘I’ve made a cardinal rule for my band that we never copy one lick and s**t like that,’ he says. ‘We just interpret the songs for what they are and do our own thing.’

Such a wide selection of genres crammed into one concert may not appeal to all, but Kennedy believes that audiences should put themselves in any musician’s hands and trust that they will be taken on a worthwhile musical journey. ‘I play what I think is right, and what the musicians around me might enjoy doing,’ he says. ‘The audience is like the last component of an electric circuit. When it’s not there, there’s something missing from the music-making process; when it is there it’s like the electric circuit is complete and there’s a flow of energy that goes to the audience and comes back to you. But it doesn’t influence my musical choices, really. I made up my mind when I was busking on Fifth Avenue in New York, where I could get six times more money in two hours than by doing a BBC recital, always to play the music that I wanted to play.’

He emphasises that no one should perform music just because they ‘can’, or because they think they ought to. ‘People should play something that relates to who they are, and try to give something that’s unique. I wouldn’t prescribe anything to anyone. That’s why I think all kids should leave music college – they should just get out there and earn a living! Too many professors have an “automatic recipe†, where they give the same repertoire to all the kids, when one might be better at Dvorák; another might be better at Ligeti. Being a professor is a load of s**te. It’s a way of getting a pension. Of all the jazz musicians I’ve played with who are worth their salt, none has been a professor. If you play well enough people can learn from you just by listening to you. Either you’re a player or you’re a talker, and it’s better to be a player, in my opinion. If you’re old enough to vote or drive a car, if you’ve got a brain you should be able to get out there and do s**t.’

Watch Nigel Kennedy's performance of his own work, Fallen Forrest, with guitarist Doug Boyle on Radio 3's In Tune: