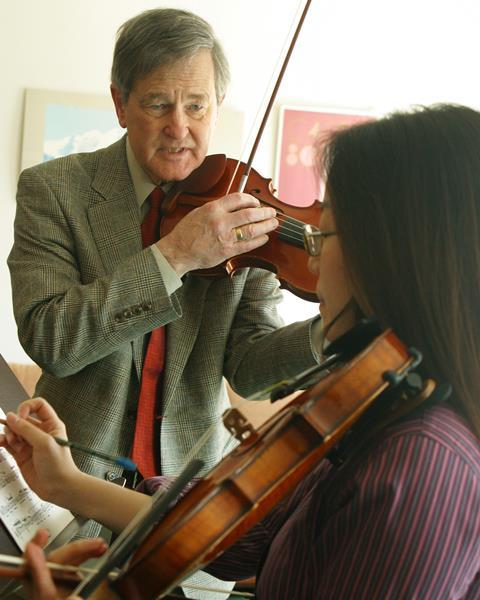 Stephen Clapp, who had a long affiliation with The Juilliard School and was a founding member of the Oberlin Trio, died on 26 January at the age of 74.

Clapp joined Juilliard as a student, studying with Ivan Galamian and Dorothy DeLay and gaining his Masters degree in 1965. The same year he won the inaugural Walter W. Naumburg Chamber Music Award as a member of the Beaux Arts String Quartet. He was also a founding member of the Oberlin Trio, and was professor of violin at Oberlin College-Conservatory and chaired its string department after returning to Juilliard to teach in 1987.

His career at Juilliard spanned over four decades, during which time he served in the pre-college division, on the violin and chamber music faculty, as associate dean and as dean, a post he held from 1994–2007. He then returned to teaching and coaching chamber music in the college and pre-college divisions while holding the title of dean emeritus. He continued to teach until the week before his death.

On appointing him dean in 1994, Juilliard president Joseph W. Polisi said of Clapp: ‘As a teacher and performer he possesses a profound and personal understanding of what it means to be a young performing artist pursuing an education and career.' Polisi went on to award Clapp an Honorary Doctor of Musical Arts in 2007. On announcing his death he described his former colleague as ‘a person of exceptional artistry, impeccable character, and deep sensitivity.’

Clapp was active as an orchestral musician and was concertmaster of the Aspen Festival Chamber Symphony and the Nashville and Austin symphonies, performing in collaboration with, among others, Itzhak Perlman, Pinchas Zukerman and Jacqueline Du Pré.