The Hupfeld Phonoliszt Violina - a self-playing violin invented in 1907 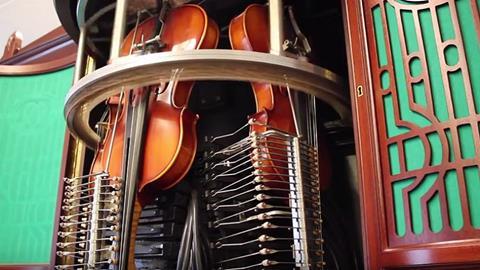 Invented in 1907, the Hupfeld Company’s ‘violin player’ was one of the marvels revealed at the World’s Fair of 1910 in Brussels.

The instrument is a combination of a player piano and three violins (each with only one active string), which are mounted vertically and played with a rotating circular bow and robotic fingers.

Hupfeld, a German organisation, was the leading manufacturer of automatic pianos between 1892-1930.

The instrument in the video above plays E. Ohlsen's Lotosblumen Walzer and was restored by Fred Bernouw in The Netherlands.