Two beloved pedagogues to be remembered in the US 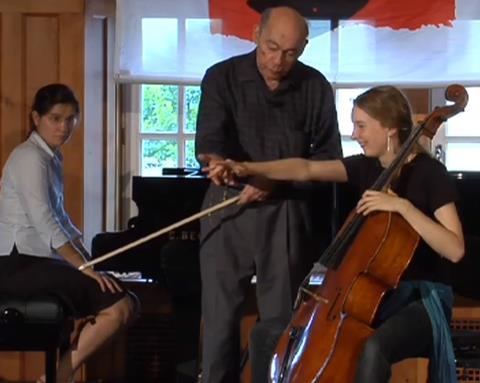 Memorials for cellist János Starker and violinist Masuko Ushioda will take place over the next two weekends at the respective US institutions where they were longtime teachers.

On Sunday 22 September the Indiana University Jacobs School of Music in Bloomington, Indiana, will honour János Starker at a free, public memorial. The programme will feature audio and video selections of the legendary cellist, and performances by violinists William Preucil and Alexandra Preucil, cellists Mark Kosower and Tsuyoshi Tsutsumi, and pianist Shigeo Neriki. The music will include Mendelssohn's Cello Sonata no.2 in D major, Bach's Trio Sonata in G Major, Brahms's Piano Trio no.1 in B Major and Fauré's 'Après un rêve'.

Starker, who died on 28 April 2013 at the age of 88, began teaching at the Jacobs School of Music in 1958. He went on to earn the title of distinguished professor, and continued teaching until close to his death. The memorial event, which begins at 4pm EDT, will be video-streamed live via the IU Music Live! website as well broadcast live on WFIU 103.7FM Public Radio.

On Sunday 29 September the New England Conservatory (NEC) in Boston will host a celebration of the Ushioda's life. Ushioda, the wife of cellist and NEC president emeritus Lawrence Lesser, died on 28 May 2013 at the age of 71, after battling leukaemia. She joined the NEC faculty in 1974 and taught college and preparatory school violin students until her death. A prizewinner at the Tchaikovsky and Queen Elisabeth competitions in the 1960s, Ushioda performed with major orchestras around the world, and appeared at the Marlboro and Spoleto festivals.

The public memorial for Ushioda in NEC's Jordan Hall will feature audio recordings and film footage of the violinist, as well as live performances by a large gathering of musicians who worked and studied with her.