The Unknown Purcell – Works for violin and keyboard 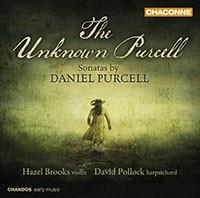 Hazel Brooks and David Pollock champion the music of Daniel Purcell, who forged musical pathways of his own in the early 18th century, long after his more celebrated cousin Henry’s death, and made a worthy case for English music during a period when the work of Italian musicians was predominant. They give variable accounts of an abridged version of the Chaconne in A minor and nine sonatas (the set of six of 1698 and three from the c.1710 collection), many of them in transposed arrangements and recorded for the first time.

Brooks lacks the extroversion and theatricality of many period violinists, but her readings are consistently accurate and well shaped, not least that of the Chaconne. She interprets the sonatas’ fast movements with energy, drive and crisp articulation, but her playing seems too cautious and ‘straight’ and lacks the subtlety of inflection to animate the soulful slow movements fully. Her somewhat calculated, metrical approach to ornamentation and her limited expressive range accentuate this deficiency, such that the music’s emotional potential is only partially tapped.

Pollock is an inventive, yet sensitive harpsichordist, filling out the continuo to maximise the resonant effect of an admirably full recording as well as shining in a solo role.